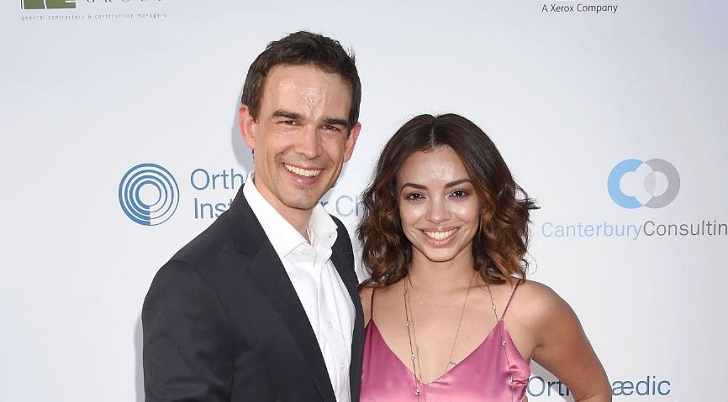 The American actress Anelita Lopez, aka Anel Lopez, started her acting career in 1997 by working in the American/Canadian film Shopping for Fangs. Her professional career rises to fame after her appearance in the Popular. In the teen comedy-drama series, Popular Anel portrayed the role of Poppita “Poppy” Fresh.

Anel was born on March 10, 1975, to father Samuel Lopez and mother, Margarita Lopez. Her parents have been married since 1972. Anel has two brothers. She graduates from the University of California, Los Angeles (UCLA). Her official Facebook page suggests that she has a Degree in Communication Sciences, Performing Arts and a Lawyer.

Besides, Anel is also gathering fame as a celebrity wife. She is no other than the spouse of American actor Christopher Gorham. Here, in the following sections, we will discuss the marital life details of Anel and Christopher. Read the article till the end.

The Fresno, California, native Christopher “Chris” Gorham was born on August 14, 1974. Like Anel, he is also a graduate of the University of California, Los Angeles. From there, he received a B.A degree in Theatre.

A year after graduating from UCLA, Christopher entered the Hollywood Film Industry in 1997. His debut T.V. series are Spy Game and Party of Five, where he portrayed Daniel/Lucas and Elliot, respectively. The same year Gorham got a chance to play his role in the films Shopping for Fangs and A Life Less Ordinary.

Christopher’s voiceover for the character Barry Allen/The Flash in the animated superhero films series Justice League is popular among other roles. Charlie Tamara Tulip O’Connell‘s father, Jerry O’Connell and mother, Rebecca Romijn, have also made a leading appearance in the movie.

Similarly, Christopher’s role in portraying the fictional character Henry Grubstick in the comedy-drama series Ugly Betty is highly appreciable. For which he received prestigious awards nominations such as Screen Actors Guild Award and Golden Derby TV Award. Moreover, Gorham’s other T.V. series credit includes The Batman, Harper’s Island, Once Upon A Time, Insatiable, Covert Affairs, and others.

Where Did Anel Lopez And Christopher Gorham Meet?

Anel and Christopher met during the initial stage of their acting career. Not only attending the same University (UCLA), but they also made their debut in showbiz by playing a small role together in Shopping For Fangs (1997).

After meeting for the first time on the set, they started sharing a healthy bond that did not take long to change into a romantic relationship. On January 24, 2020, Anel shared their throwback picture from 1996 on her Instagram, saying, “Two 21 yr olds C. 1996 #tbt #anniversaryedition.”

Later, Lopez and Gorham were signed as the supporting and main characters of The W.B.’s series Popular, where actor Gorham can be seen portraying Harrison John. Their roles helped them uplift their career and gather media attention and fan following.

Anel Lopez Got Hitched To Christopher Gorham In 2000

The actress Anel and Christopher took their relationship to the next level following several years of romantic union. The couple walked down the wedding aisle on January 22, 2000. Their wedding ceremony was attended by their friends and family members at church.

Anel was 25 when she tied the knot where she chose a strapless gown. Similarly, the Medical Investigation actor Christopher dashes the wedding look by wearing a black tuxedo. As of now, Mr. and Mrs. Gorham have already celebrated their 22nd wedding anniversary.

On January 23, 2021, Anel share pictures from their wedding to wish her husband Christopher on their 21st wedding anniversary. Happy Anniversary to the love of my life. 1/22/2000. How can so many wonderful adventures, memories and experiences spring from this one crazy coupling? #HappyAnniversary #MySweetheart,” she wrote.

Christopher also never misses a chance to share appreciation posts and wishes Anel on their anniversaries. Besides, the married pair is on the Board of Members of the Orthopedic Institute for Children (O.I.C.), Los Angeles, California.

Anel and her hubby Christopher shared three adorable children from the strong marital solidarity. They welcomed their first child, a son, Lucas Lopez Gorham, in 2001. Similarly, they became parents for the second time in 2003, welcoming their son Ethan Lopez Gorham. Moreover, their third kid, a daughter, Alondra Cecelia Lopez Gorham, was born in 2009.

The Jake 2.0 actor Christopher and his wife Anel’s second-born son Ethan graduated from San Marino High School, California, in May 2022. As of now, the 19-years-old Ethan enrolls at DePaul University, Chicago, Illinois.

The Gorham siblings of three are living a spotlight life with their celebrity parents. They often feature on the post updated by Anel and Christopher on their official Instagram handles.

Lopez has also not mentioned the exact net value she enjoys. But, as per estimation, she has a net worth of $400 thousand which she hoarded from her professional acting career. Anel has featured in movies, and T.V. shows like Felicity, Damaged Goods, Easy Six, and The Adventures of A.R.K. From the appearances, Lopez might receive a good sum of wealth.

On the other side, the 6-feet-0-inch (183 cm) tall Christopher enjoys a $5 million net worth, which he gathered from his professional decade-long acting career. Dorham has been cast in various successful movies that have collected an impressive amount at their box office. So, undoubtedly Christopher is earning a remarkable fortune enough to live a lavish life.

For Further Updates On Your Favorite Hollywood Actor/Actress, Stay Adjusted With Favebites