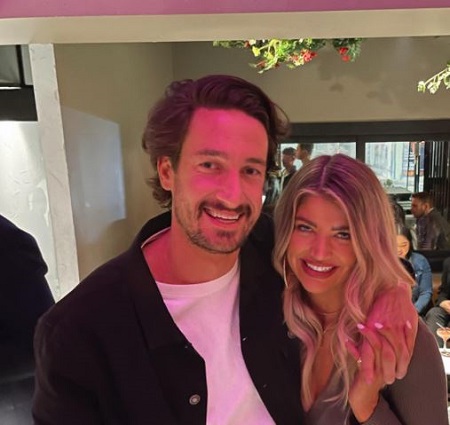 If you are fond of watching dating reality shows, you might have watched Love Island Australia. Today we are writing about Anna McEvoy, the winner of The Love Island season 2 with partner Josh Packham.

The Melbourne native Anna is a fashion model. Also, she is famous for uploading stunning pictures on her Instagram with more than 300 thousand followers. Likewise, the reality star McEvoy co-host a podcast, ‘Where’s You Head At?‘ with fellow castmate Matthew “Matt” Zukowski.

Know the detailed information on Anna’s present and past relationship history in the following sections.

In A Loving Relationship With Boyfriend, Michael Staples

The reality TV star Anna is no more single after parting ways from her former partner. The 29-years-old beauty is in a romantic relationship with Michael Staples. McEvoy’s boyfriend Staples works as a Group Business Manager at Nine, a media company.

Anna and Michael began their romantic affair in September 2021. McEvoy took Instagram to announce her relationship with Staples. On September 28, 2021, Anna shared a kissing picture with Michael saying, “you make my heart go.” She has also talked about her blossoming relationship in detail on her podcast.

As of now, Anna and her beloved beau Michael are having a good time sharing a romantic bond. The couple spends quality time together. Additionally, they never miss a chance to share romantic pictures on their official Instagram accounts.

Anna joined The Love Island Australia (season 2) as one of the contestants, where she found her connection, Josh Packham, a 27-years-old reality star.

Packham and McEvoy’s romantic bonding made them the season’s winner. Their union continued even after coming from reality shows to the real world. Everything was going fine; Anna and Josh were sharing a healthy relationship. However, in November 2020, following a year-long dating, they decided to part ways. The pair also spend time together during the COVID-19 lockdown.

The couple announced their separation in a joint statement via Instagram post. Announcing the split, Anna wrote, “It is with great sadness that Josh and I are going out separate ways. It’s extremely difficult to break up with someone who you still love but it is the right thing to do.”

Similarly, on the Instagram stories, Josh wrote, “We have had an amazing journey, but unfortunately sometimes relationships don’t work out, and two people grow apart.” It seems like Anna and Josh remains friend after the breakup. Furthermore, Anna has not deleted her old photos with Josh, which she shared on her Instgram account.