Who is Anders Holm’s wife Emma Nesper? Know about His Married Life 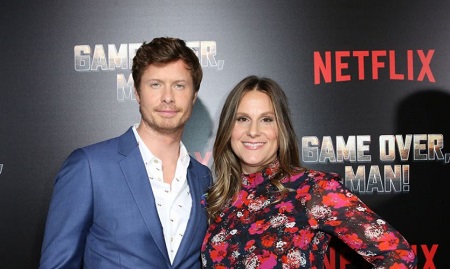 Emma Nesper has experience working in several non-profitable organizations. Since October 2018, Nesper has been serving as Senior Director, Development and Partnership at CARE, an international humanitarian agency.

Nesper is living a blissful professional life. Besides profession, she is widely receiving fame as the wife of Anders Holm. Emma’s husband Anders is an American screenwriter, producer, actor, and comedian featured in various successful movies and TV shows.

Nesper and Holm first met while attending the Evanston Township High School, Illinois. Later, both of them attended the University of Wisconsin-Madison. From there, Emma received a BA Degree in Journalism and Mass Communications. Likewise, Anders earned a BA degree in History.

After a year-long friendship, Emma and Anders began their romantic relationship, which is still going smooth and strong.

After more than five years of dating, this lovely pair decided to take their relationship to the next level. Emma and Anders exchanged the wedding vows in September 2011. The couple tied the wedding knot in an intimate outdoor wedding ceremony.

The bride and groom’s family members, relatives, and friends attended the event. The detailed information regarding their marriage is lacking. But, on the big day, Emma wore a strapless gown with a short veil. Anders walks down the aisle wearing black suit pants, a white shirt, and a black bow tie.

Since the wedding day, Mr. and Mrs. Holm are sharing a healthy bond as perfect married partners. The married duo is not involved in any rumors related to the separation. Anders and his wife have already celebrated their 10th wedding anniversary.

The MTV Movie+TV Award-nominated actor Anders and his wife Emma are blessed with two adorable boys. They shared their first son on December 19, 2013. However, his name is still not disclosed.

On January 7, 2014, Anders shared a picture of his baby boy, captioning, “Lay off me, I’m starving… for t***l.” Similarly, their second son’s name and birthdate are also missing. Emma and Anders have kept their children far away from the limelight, unlike other star kids. However, some of the Holm siblings’ childhood images can be seen on Emma’s Facebook post.