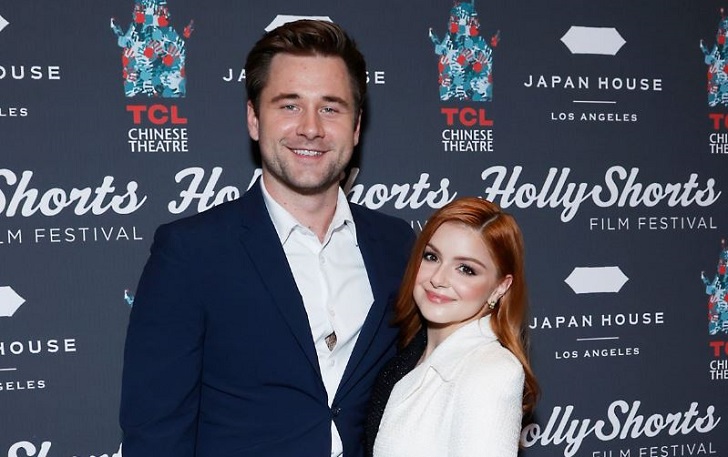 You might have watched the popular ABC family sitcom Modern Family. Today we are discussing the show’s one of the leading casts, Ariel Winter, who played the role of Alex Dunphy. Her role as Alex assisted her acting career in growing to stardom and received popularity all over the industry. In the ‘Outstanding Young Ensemble in a TV Series’ category Winter also received Youg Artist Awards.

The charming actress, who celebrates her birthday on January 28, was born in Fairfax, Virginia, as Ariel Winter Workman, in 1998. She is the third born child of Chrisoula Batistas Workman and Glenn Workman. Alexis’ elder siblings, Shanelle Workman and Jimmy Workman, also have experience working in movies and TV series.

Alexis’ professional details are pretty knowledgeable, but she is one of the celebrities who prefer to continue their love life privately. Scroll below to know about Winter’s present relationship status.

The 24-years-old Batman: The Dark Knights Return actress Ariel is living a private romantic life with her beloved, Luke Benward. The 27 aged Luke is also an actor known for his recurring role as Beau Landry in Good Luck Charlie. Also, Benward has made her appearance in the drama Ravenswood and Netflix film Dumplin.

The details regarding Ariel and Luke’s first meeting are quite secretive, but it is known that they remained friends for a long time before the romantic connection buildup. The rumors regarding Winter and Benward’s romance arose in December 2019 after the paparazzi captured their togetherness at a West Holywood restaurant.

However, the couple took over a month to confirm their relationship status. On May 13, 2022, Ariel shared images with her partner Luke, wishing him his 27th birthday, writing, “Happy birthday, my love! 27 looks good on you. You are such a wonderful man, and I am beyond grateful we get to do life together.

She added, “So excited for this new chapter with you poots. Thank you for being the extra special man + dog dad you are. We love you more than you know. Lucky to be in love with my best friend. Likewise, Luke wished Ariel on her 24th, saying, “Happy Birthday, bunny. I love you.“

Smurfs: The Lost Village voice actress Ariel and Still the King actor Luke has not shared information about them taking their relationship to the next level (engagement and marriage). But, the pair have adopted adorable pet dogs and parenting them jointly.

On July 30, 2021, dog lover Ariel shared pictures with her five different breeds of pet, writing, “These 5 have my [heart]. Anyone else absolutely obsessed with their furkids and feel like sharing? Tag me I wanna see their sweet faces. Extra, if you have a pittie or pittie mix or a rescue story. #dogofinstagram.”

The 5-feet-1-inch (155 cm) tall Ariel and the 6-feet-2-inch (188 cm) tall Luke made their filmmaking debut in 2021 from Boys. In the short film Boys, Ariel worked as a producer, and Luke was a director and producer. The stars such as Jules Willcox and Scott Reeves are featured in short.

On October 29, 2020, Winter shared a picture hugging Benward, captioning, “YEAH BABY! Bunny, the Producer + The Dude, the DIRECTOR (and producer)! I’m so proud of you and so honored to be your partner in all things. Such an amazing director and an even more amazing person.

“Watching you create is something special, and I know this is just the beginning. Can’t wait to keep growing, building, creating and achieving together. I love you cozer,” Ariel added.

Similarly, Winter and Benward are filming for their second joint project, Don’t Log Off, where the actress is portraying the role of Annie and Luke is playing Adam. Also, they are serving as producers in the upcoming film.

Before sharing Public Display Affection (PDA) with her now-boyfriend Luke, The Quarry star Ariel was in a long-term relationship with Canadian actor Levi Meaden. Ariel and Levi started their affair in November 2016. Less than a year after beginning the relationship, Winter and Meaden start living together.

During an interview with Jimmy Kimmel, the actress said, “I do have my own house…My boyfriend and I live together, and he cooks. I can’t cook at all, so he takes care of all that handy stuff. He does all that. I can bake a pie, occasionally.” However, Meaden and Winter’s ended their three years long relationship in late 2019. Neither Levi nor Ariel mentioned their separation reasons.

On the other side, actor Luke dated actress Olivia Holt. Benward and Holt met while filming for Girl vs. Monster. In a 2012 Disney Channel television film, Luke portrayed Ryan Dean, and Olivia played Skylar Lewis. Their relationship also did not last long. They parted ways in 2014.