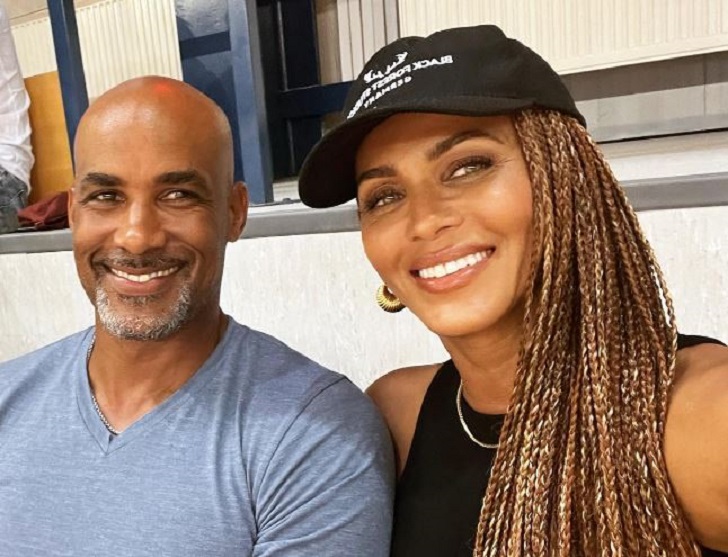 The Australian/American actor was born on March 8, 1973, in Vienna, Australia, to Eric Kodjoe and Ursula Kodjoe. He joined the Virginia Commonwealth University, Richmond, and received a Bachelor’s degree in Marketing. Boris was also on the University’s men’s tennis team. The actor has three siblings, Patrick Kodjoe, Nadja Kodjoe, and Lara Kodjoe.

Boris was nominated for the Black Reel Award for Best Supporting Actor for portraying Detective Joe Moran in the drama film Killer Among Us. Kodjoe’s other acting credits are Cape Town, The Last Man on Earth, House of Cards, Undercovers Second Time Around, Madea’s Family Reunion, etc. Besides living a successful professional acting life, the actor’s marital relationship also seems blissful and booming. Know about Boris and his wife Nicole Ari Parker‘s wedding details down.

The 49 aged actor Boris currently lives a healthy and marital relationship with his beloved wife, Nicole Ari Parker. Boris and actress Nicole Ari’s romance started at their workplace, i.e., on the set of an American drama series Soul Food.

The actor Boris played the character of Damon Carter, and actress Nicole portrayed Teri Joseph. Soon after sharing the screen, Kodjoe and Parker did not wait long to change their relationship from colleagues to love partners.

American actors Boris and Nicole have jointly hosted the syndicated talk show The Boris & Nicole Show. Similarly, the 51 aged actress Nicole has made her guest appearance in the reality series Real Husbands of Hollywood, whereas Boris is featured as the main character. Likewise, Hollywood entertainers have worked together in the UPN sitcom Second Time Around.

They Married In Germany

The Unforgettable actor Boris and Time After Time actress Nicole took their relationship to another level by marrying on May 21, 2005. The couple, who had dated for more than a year, exchanged their wedding vows in an intimate ceremony at “900-year-old church” in Gundelfingen, Germany.

The bride and groom’s “90 family members and closest friends” attended Nicole and Boris’ big day reception. The 6-feet-4-inch (193 cm) tall Boris got hitched wearing a white tuxedo with a cream-colored shirt and a green checkered tie. And Nicole chooses to wear an off-shoulder gown to walk down the wedding aisle with Boris.

Boris and his wife Nicole recently celebrated their 17th year of marital bonding. On their 10th marriage anniversary, Boris shared their wedding image on his Instagram, writing, “THE DAY, May 21st, 2005. Gundelfingen, Germany. We didn’t want a huge Hollywood wedding with hundreds of people we didn’t know. So we got married in the 900-year-old church in my hometown with 90 family members and our closest friends. After the service, we walked from the church to the beautiful reception in my Oma’s backyard. Along the way, people leaned out of their windows and tossed flowers down on us wishing us well.“

The Station 19 actor Boris is the father of his two adorable kids. Boris and Nicole welcomed their first child, a daughter, Sophie Kodjoe, in March 2005, several months before marrying.

Similarly, the husband-wife duo became parents for the second time on October 31, 2006, after she gave birth to Sophie’s brother, Nicolas Neruda Kodjoe. The 6-feet-4-inch (193 cm) tall Nicolas is a basketball player.

Boris and Nicole’s daughter Sophie is famous on social networking sites. She has more than 20 thousand followers on her official Instagram account and nearly 1000 followers on Tiktok.

The Kodjoe brother and sisters currently live in the limelight life grabbing media attention as celebrity kids. They also make their appearance on their parent’s social media posts.