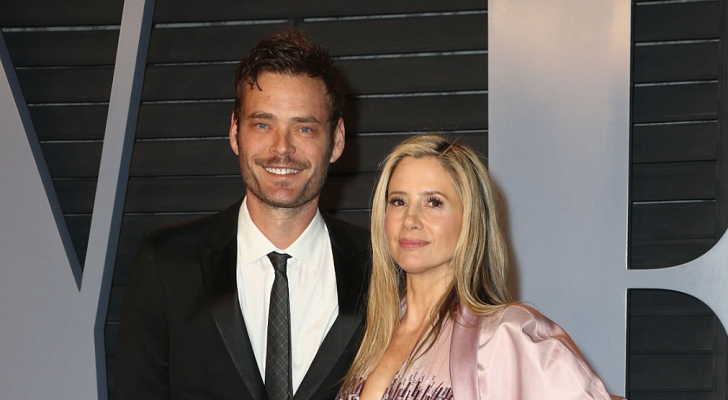 Christopher Backus, an American actor, is known for his acting proficiency and has provided his roles in various successful movies and T.V. series. Backus’s made his television debut in 2005, playing Adam in the popular NBC television sitcom Will & Grace and earning immense popularity. His other notable character includes, Always Sunny, Sons of Anarchy, Heel on Wheels, etc.

The actor is the son of Teryl Backus (mother) and late. Terry Backus (father) was born Christopher Paul Backus on October 30, 1981, in Mission Viejo, California. Christopher has a sister named Michele Backus. Besides, the details regarding his education are missing.

The O.C. actor Christopher is in a marital relationship with his wife, Mira Sorvino. Learn more about Mira and Christopher’s married life below.

The 54 aged Mira is a bold and beautiful actress who has achieved the Academy (Oscar) Award for Best Supporting Actress for playing Lind Ash in the 1995 comedy film Mighty Aphrodite. The actress has been making her presence in Hollywood showbiz since 1985, landing her first role as Factory Worker in The Stuff.

Like Christopher, Mira has starred in Will & Grace. Sorvino and Backus have made their joint appearances in various projects such as The Last Templer (2009), Indiscretion (2016), Mothers and Daughters (2016), Beneath The Leaves (2019), etc.

The Mindhunter actor Backus and After We Fell actress Sorvino began their romantic affair in 2003 after meeting for the first time at a friend’s party. They did not waste time starting a romantic relationship soon after the first encounter.

Following less than a year-long dating, Christopher and Mira exchanged their wedding vowed on June 11, 2004. Their civil wedding ceremony was held in Santa Barbara, California’s courthouse. On the wedding day, the bride Mira wore a thin strap gown with a short veil and the groom Christopher sported a long black coat, dark grey pants, a light grey waistcoat, a white shirt and a tie from Armani.

As of now, Mr. and Mrs. Backus are sharing a healthy marital life, sharing a beautiful bond. The 6-feet-3-inch (191 cm) tall Christopher and his beloved wife Mira celebrated their 18th wedding anniversary in June 2022. Mira wrote on her Instagram that she wishes her husband Christopher on their anniversary, “Happy Anniversary Baby, 18 years married, 19 years together. Can’t wait to see where we go next! @christopherbackus.”

They Have Four Children

The Life on Mars actor Christopher and Summer of Sam actress Mira shared four children from their marital relationship.

They became parents for the first time on November 3, 2004, sharing a daughter, Mattea Angel Backus. Similarly, their second kid, Johnny Christopher King Backus, was born in May 2006.

As of now, Christopher and Mira are jointly parenting their children. The 17 aged Mattea and her younger siblings also gather fame as celebrity kids and often make their presence in their mother and father’s social posts.