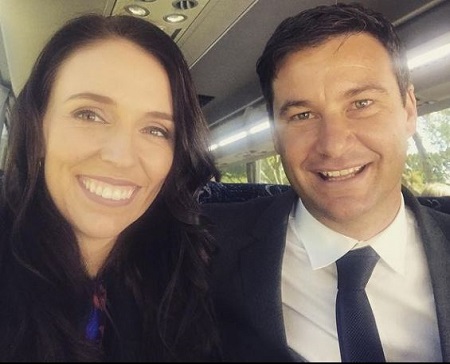 Jacinda Ardern is the 40th Prime Minister of New Zealand, serving since October 26, 2017. The strong, talented, and feminist Prime Minister Ardern is receiving wide fame as one of the greatest politicians. She is the leader of the New Zealand Labour Party. The party’s focus is on maintaining social inequality remove and child poverty.

The 41-years-old Jacinda is in a blissful romantic relationship with her beloved partner Clarke Gayford. Clarke is a journalist who has worked in radio and TV stations such as More FM, George FM, C4 and others. Know the detailed information regarding Grayford and Ardern’s relationship in the following sections.

The Fish of The Day presenter Clarke met Jacinda for the first time in 2012 at the Metro Restuarant Awards in Auckland. Gayford hosted the award function, and Ardern was a guest invited by model Colin Mathura-Jeffree. However, that was their brief meeting only. They did not spend time together that day. At the time, Ardern was a member of parliament (MP) of the New Zealand Labour Party.

Later, in 2013 Clarke contacted then MP Jacinda regarding the constituency issue, Government Communications Security Bureau Amendment Bill. Then they decided to discuss the matter, enjoying a coffee. At the coffee outing, Clarke and Jacinda talked normally. They also figured out that they have the same interest in music.

It changed into a romantic coffee date where Jacinda and Clarke got to know each other. Soon Ardern and Gayford began their romantic relationship. As per Clarke, he took her fishing on their first date. He said, “It was literally Jacinda’s first cast, and she was like, ‘Ooh! Something’s pulling!’ … she said, ‘Is that good?’ And I was like, ‘That’s real good!“

Following five-years long dating, the TV host Clarke proposed to her girlfriend-turned-fiancee Jacinda. Grayford got down one knee and proposed to Ardern with his grandmother’s engagement ring in 2019. He popped the question at the top of Mokotahi Hill in Mahia during the Easter Weekend.

Jacinda, who was “surprised” regarding the proposal, merrily accepted it. Ardern confirmed the news regarding their engagement at the cabinet meeting. However, Clark and Jacinda have not yet confirmed their wedding date. It seems like they will soon tie the wedding knot.

On January 18, 2018, Jacinda publicly announced her pregnancy via social media posts. Ardern wrote, “And we thought 2017 was a big year! Clarke and I are really excited that in June, our team will expand from two to three and that we’ll be joining the many parents out there who wear two hats. I’ll be Prime Minister AND a mum, and Clarke will be “first man of fishing” and stay-at-home dad.”

As of now, the three-year-old Neve Te is living a limelight life with her celebrity parents. She is also earning fame as a celebrity daughter. Neve can be seen on the post updated by Clarke on his Instagram account.