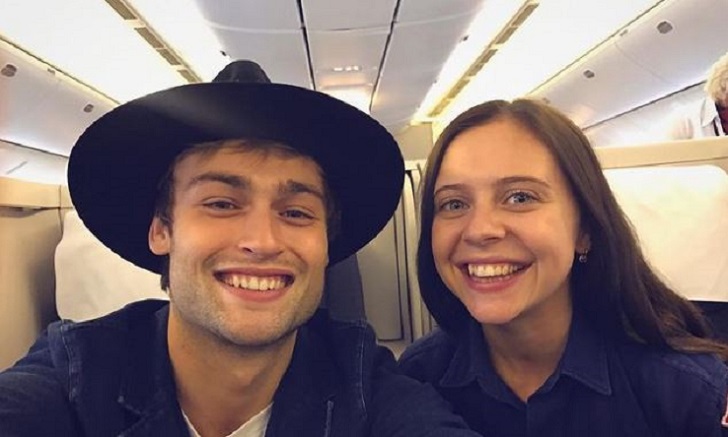 The English actor Douglas Booth made his acting debut in 2006 by working in the film Hunters of the Kahri. Since entering the film industry, Booth never lacks to impress the audience through his acting skills. Douglas’ breakthrough performance is as Boy George in the biographical drama film, Worried About the Boy.

The 6-feet-1-inch (185 cm) tall actor Booth is not only grabbing media attention from his successful professional work. But, he is also earning well. Douglas has a net worth of $6 million. Concerning education, Douglas attended the Guildhall School of Music and Drama. Now, let’s discuss Booth’s love life details and present relationship status in the following sections.

The 29-years-old actor Douglas is in a blissful romantic relationship with his beloved partner Isobel Dorothy Powley, aka Bel Powley. Bel, 30, is also a professional actress, better known for playing Daisy Millar in the British action series M.I. High.

The British Independent Film Awards-nominated actress Bel has featured in movies and TV shows such as The King of Staten Island, MoominValley, A Royal Night Out, The Morning Show, and others.

Douglas and Bel first met in 2016 on the set of Mary Shelley. In the romantic period drama film, Powley has played the leading role of Claire Clairmont, and Booth portrayed Percy Bysshe Shelley. After the first encounter, Bel and Douglas shared a good bond and soon began their romantic relationship.

Douglas Booth And Bel Powley Got Engaged In 2021

The British entertainers Douglas and Bel got engaged in July 2021, following five-years long dating. Booth got down to one knee and proposed to Bel with a diamond ring in Primrose Hill. The lovebirds shared their engagement news via Instagram posts.

They are soon tieing the wedding knot. Similarly, The Dirt actor Douglas and The King of Staten Island actress Bel spends quality time together. Also, they never miss a chance to share pictures on their social sites.