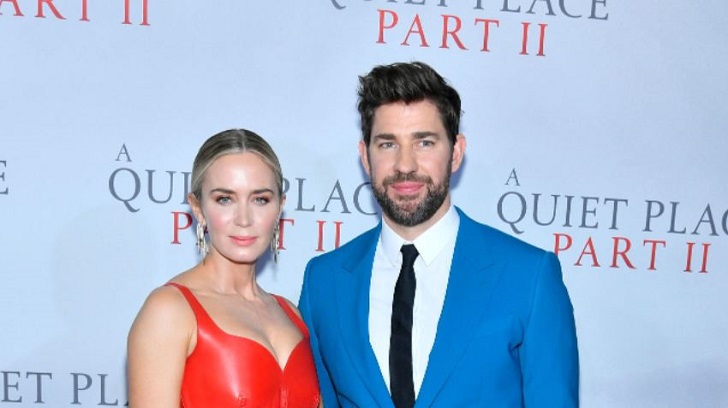 The multiple prestigious award-winning British actress Emily Blunt has been actively involved in the acting sector since 2001. Blunt’s breakthrough came in 2006 with the role of Emily in the comedy-drama series The Devil Wears Prada. Emily’s role in the science fiction film Edge of Tomorrow is also appreciable.

Emily undoubtedly earns an impressive sum of wealth from her successful decade-long involvement in the acting industry. Blunt has a whopping net worth of $80 million. Now, let’s discuss the detailed information regarding Emily’s marital life with her husband, John Krasinski.

The 39-years-old actress Emily first met her now-husband John in 2008 in a restaurant. Their mutual friends introduced Blunt and Krasinski. After the first encounter, Emily and John shared a good bond and soon began their romantic affair.

Explaining her first meeting with John, Emily on Late Night With Seth Meyers, Emily said, “I was in a restaurant, he was in the restaurant. I was sitting with a mutual friend, Gray and he goes, ‘Oh my god, that’s my friend John.’ And that was it. He was sitting with our friend Justin Theroux [actor], and he abandoned Justin and came over to us. He just stood there and made me laugh.”

Like Emily, John is also a successful actor. He has starred in movies and TV shows such as Shrek The Third, Doctor Strange in the Multiverse of Madness, BoJack Horseman, Jack Ryan, etc. John is also the director, writer, and producer. Likewise, Emily and John have starred together in A Quiet Place horror film and its sequel.

Their Wedding Life Since 2010

Following a year-long dating, The Office actor John proposed to his girlfriend, Emily, in August 2009. Krasinski proposed to Blunt in a casual ceremony in Los Angeles.

The Huntsman: Winter’s War actress Emily and her husband John soon celebrate their 12th wedding anniversary in July 2022. The married pair jointly makes their presence in public events. Emily is not active on any social networking sites. But, John sometimes shares pictures with Blunt on her official Instagram account.

Emily and John are parents to their two adorable girls. They became parents for the first time on February 16, 2014, sharing a daughter, Hazel Krasinski. Similarly, their second daughter, Violet Krasinski, was born in June 2016. John and his wife Emily are jointly parenting their daughters. However, unlike other star kids, Hazel and Violet are kept far from the media attention.