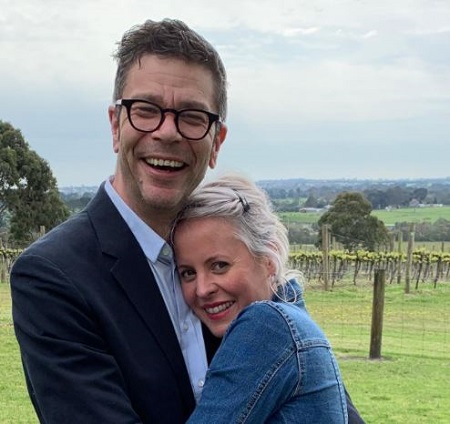 To catch media attention after the wedding knot with celebrities is not a new thing. Many women whose prominence rises to fame after sharing their intimate life with famous personalities. Among others, Hollie Kennedy is also the one. The midwife Kennedy is non-other than the wife of Australian TV personality Dylan Lewis.

Since sharing a marital life with Dylan, Hollie lives the limelight life. She is recognized as a celebrity wife. Now, let’s read how is Hollie and Dylan’s marital life going in the following sections.

The 2002 Celebrity Big Brother winning host Dylan first met his now-wife Hollie first met a crowded room where Lewis was performing live music with his band. Hollie was invited there by their mutual friends.

It was love at first sight for Dylan. Explaining his and Kennedy’s first met. Dylan said, “It was back in the ’90s, my band was playing a gig and Hollie was invited by a mutual friend.” He added, “When I saw her, I couldn’t see anyone else in the room. Hollie was the most beautiful person I’d ever seen. At the time, I said to myself and my bandmates: “That lady will be my wife and the mother of my children one day.”

Begining Of Love Story And Engagement

Shortly after starting dating each other, Dylan proposed to Hollie in Paris. However, Dylan said that was their temporary engagement. Regarding engagement, he said, “we didn’t tell anyone we were engaged back then because we were so young and we didn’t want anyone to judge us.”

After two years, Dylan again popped the question to his sweetheart Kennedy with a diamond ring. She also merrily accepted his proposal. This time the couple seriously got engaged and “told everyone.”

Hollie, 44, is now blissfully married to her husband, Dylan. Kennedy and Lewis tied the wedding knot on February 2, 2002. The intimate wedding ceremony was held at Hollie’s mother’s home. The couple was planning for an outdoor wedding ceremony at the beach. But, due to rain, they ended up marrying at the house.

On the big day, the bride Hollie chooses a strapless dress. On the other side, the groom, Dylan, walks down the aisle wearing a grey tuxedo.

Since the wedding day, Mr. and Mrs. Lewis are sharing a good bond as a perfect married partner. The celebrity wife, Hollie, visits many exotic places with her husband, Dylan. The married duo is soon celebrating their 20th (two-decade-long) marriage anniversary. Additionally, Hollie can be seen on most of the posts shared by Dylan on his official Instagram account.

Hollie and her husband Dylan are parents to their two adorable children. Their eldest, daughter Rose Lewis was born in 2009. Similarly, Hollie and Dylan became parents for the second time in 2013, who shared a son Jethro Lewis.

As of now, Dylan and his wife Hollie are jointly parenting their kids. The Lewis siblings are also receiving fame as celebrity kids. Rose, 12, and her brother Jethro, 8, can also be seen on their father’s social media posts.