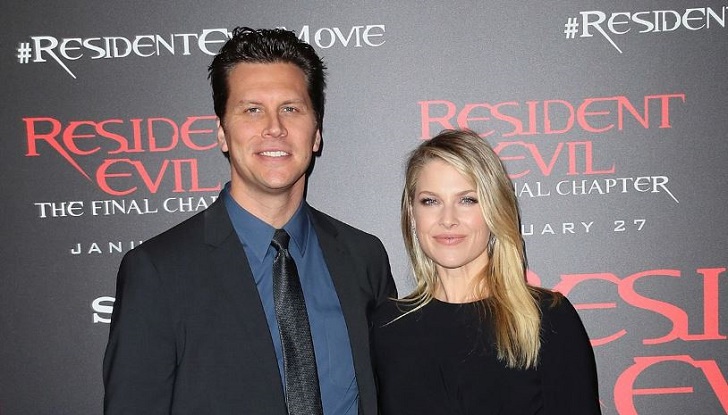 Hayes MacArthur is a professional Hollywood actor whose prominence rises after appearing as a regular cast in the series Angie Tribeca, Mr.Mom, etc. His other noticeable credits include How I Met Your Mother, A Haunted House 2, The Binge, and others.

MacArthur is a native of Chicago, Illinois, born on April 16, 1977. He is the elder son of Bruce MacArthur and Shelley MacArthur. Hayes has a brother named Scott MacArthur, who is also an actor by profession. The 42 aged Scott has starred in The Righteous Gemstones, The Mick, EI Camino: A Breaking Bad Movie, etc.

MacArthur is an alumnus of Bowdoin College, where he received a Bachelor of Arts (B.A) degree in Government. Later, thinking of starting a career in the entertainment sector, Hayes attended Groundlings Theatre Company and Atlantic Theatre Company. Since 2003 MacArthur has been immensely earning fame as one of the finest American actors. Now, let’s discuss the details below regarding Hayes’ family and marital life.

Wife, Ali Larter, Is Popular For Her Acting Credits

Like Hayes, his wife, Ali Elizabeth Larter, is an American actress. The 46 aged Ali has been a part of the Hollywood Film Industry since 1997, best known for providing the character Clear Rivers in Final Destination to the public. For the supernatural horror film, Larter received Young Hollywood Awards.

Hayes MacArthur And Ali Larter Have Worked In Homo Erectus

MacArthur and Larter receive public attention as part of the Hollywood entertainment industry. Not only that, but it also became a medium for their first meeting. As per the sources, the actors MacArthur and Larter had their first encounter while working on their first joint project, Homo Erectus. In the 2007 comedy film, Hayes portrayed the role of Thudnik, and Ali played the character of Fardart.

However, some sources claim that Hayes proposed to Ali in December 2007 following three years of dating. So, the details regarding their first and foremost meeting and how they started their relationship in still confusing.

The couple takes two years after the engagement to take their relationship to the next level. Hayes and Ali got married on August 1, 2009. Their wedding ceremony took place privately in Kennebunk, Maine, in the presence of their friends and family members. So, the details regarding the marriage are lacking.

Since the big day, Hayes and his wife Ali are sharing a healthy marital bond. Mr. and Mrs. MacArthur have already celebrated their 13th wedding anniversary as of August 2022. The married pair jointly features on one another’s Instagram posts. On August 2, 2014, sharing a wedding picture, Ali wrote, “5 years ago, today. And still loving the adventure. Xx, A.”

Hayes MacArthur, Father Of A Boy And A Girl

Hayes and his wife Ali welcomed two adorable children from the marital union. They became parents for the first time on December 20, 2010, sharing their son Theodore Hayes MacArthur.

On August 19, 2014, Ali shared a picture on her Instagram flaunting her baby bump. Later, she gave birth to their second child, a daughter, Vivienne Margaret MacArthur, born on January 15, 2015. As of now, Hayes and Ali are jointly raising their kids, who are in their middle childhood.

Hayes undoubtedly collects an impressive sum of wealth from his professional acting works. Although his exact net worth details are missing, he has an approximate net value of $1 million. The actor has featured in various movies and TV shows with good box-office collections. Some of them are listed below.

On the other side, Hayes’ talented wife Ali owns a $10 million net worth, collected from her modeling and acting career. Larter has also appeared in box-office hit movies. The Final Destination (2000) collected $112.9 million at its box office under the production budget of $23 million.

Similarly, the action horror film Resident Evil: Extinction made $147.7 million under the budget of $45 million, where she played the role of Claire Redfield. Likewise, its sequel, Resident Evil: Afterlife, collected $300.2 million with a production budget of $60 million.