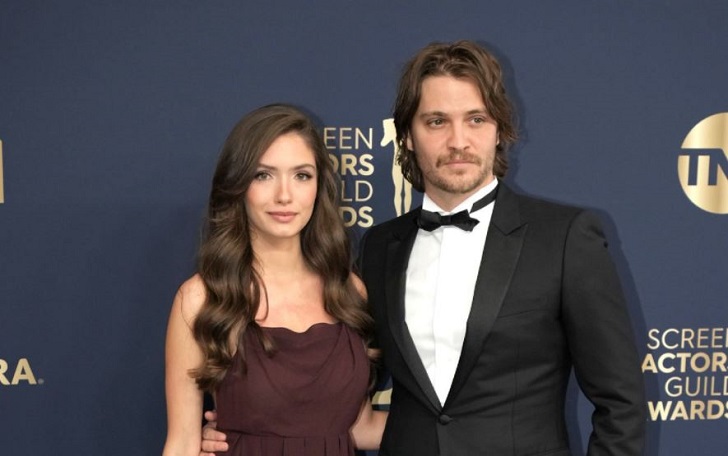 Luke Grimes, an American actor, is well-known for portraying Elliot Grey in the Fifty Shades of Grey and its sequel. Grimes was nominated for the Screen Actors Guild Award for the Outstanding Performance in Yellowstone, Paramount drama series.

The American Academy of Dramatic Arts graduates Luke has featured in successful movies and TV shows. From which he is earning good recognition and payments. But what about Grimes’ marital life? Know about his wife and marital details in th following sections.

The 38-years-old American Sniper actor Luke’s wife Bianca Rodrigues is a model by profession. Bianca is a fashion model from Brazil and has worked with several fashion brands and modeling agencies.

Grimes’ wife, Rodrigues, is also active on Instagram. She has more than 200 thousand followers on her official Instagram account, where she often shares pictures with Luke. As per Bianca’s Facebook profile, she studied at the Institute For Integrative Nutrition. Besides, detailed information regarding Bianca is missing.

Their Marital Life Since 2018

How and when the Brothers & Sisters cast Luke and model Biance met is unclear. But it seems like Grimes and Rodrigues dated for severe years before tieing the wedding knot. The duo walked down the aisle in November 2018.

Their intimate wedding ceremony was held privately, so detailed information regarding it is lacking. Unlike actor Dave Annable and his wife Odette Annable, Luke and Bianca prefer to keep their marital details far from the limelight. Luke and his wife Bianca have celebrated their third wedding anniversary.

Luke is not active on any social sites. But, Bianca sometimes shares pictures with her husband Luke on her Instagram account. Similarly, the married pair also makes public appearances by attending events and functions.

On March 7, 2022, Mr. and Mrs. Grimes participated in the 57th Academy of Country Music Awards function in Las Vegas, Nevada. The husband-wife duo is blissfully living their private marital life without creating rumors about the separation.

The 6-feet (183 cm) tall actor Luke has an approximate net worth of $600 thousand. Grimes collected these hefty sums of wealth from his movies and TV series appearance.

Luke became part of the Hollywood Film Industry in 2006, featuring in the slasher film All the Boyd Love Mandy Lane. Grimes is famous for appearing in the Fifty Shades of Grey; the movie made $569.7 million under the $40 million budget. Similarly, its sequel, Fifty Shades Darker and Fifty Shades Freed collected $381 million and $372 million at the box office.

Likewise, the 2014 biographical war drama film American Sniper collected $547.4 million at its box office under a budget of $59 million. In the movie, Luke plays the role of Marc Lee.

For the information, actress Jennifer Love Hewitt has also made her appearance in American Sniper.

Moreover, in the western action film The Magnificent Seven (2016), Grimes portrayed the character Max. The movie collected $162.4 million under the budget of $107 million. Furthermore, Luke has featured in the TV series True Blood with actor Nelsan Ellis.