Skip to content
Home » Entertainment » Is Ashley Kramlich Engaged? Details about her Wedding

Is Ashley Kramlich Engaged? Details about her Wedding 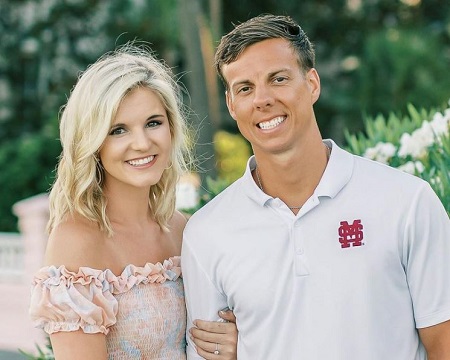 Kramlich is now a happily engaged woman. She recently accepted her wedding proposal and is preparing for the marriage with her partner. Know about her love life, engagement in the following sections.

The beautiful Ashley Kramlich has taken her relationship to the next level and is happily engaged with Blake Pannell. Talking about her partner Pannell, he received his Doctor of Law degree from Mississippi University. Pannell works as a contract manager at Raytheon Technologies.

Ashley and Blake started dating in 2012. Following a nine-year-long relationship, Blake finally proposed to Ashley by an engagement ring on March 27, 2021. Pannell got down one knee and proposed to Kramlich at Bobby Jones Golf Course.

Ashley, who was surprised by his proposal, merrily accepted it. She revealed the news of her engagement via Instagram posts. In addition, Ashley has a pet dog named Tucker.

As of now, the newly engaged pair (Ashley and Blake) is preparing for their wedding. On September 24, 2021’s Instagram post, Kramlich announced that she and her partner Pannell are exchanging vows on June 18, 2022.

Similarly, weathercaster Ashley joined KYTX-TV in May 2016. There she served for 2-years till May 2018. Likewise, Kramlich worked for FOX 45 from June 2018 to 2021 as a weekend evening meteorologist.

After experiencing various TV networks, Ashley has been working for WSOC-TV since June 2021. Ashley forecasts the weather from WSOC-TV Eyewitness News Weather Team.