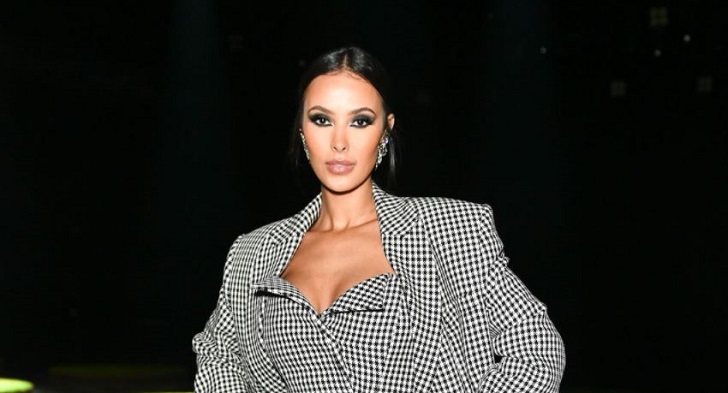 Besides being a television personality, Maya is also the beauty brand MIJ Masks founder. Because of her successful professional career, Jama’s love life details are also curiously searched in the media. Know about Maya’s secret romantic relationship in the following sections.

The British presenter Maya, who has collaborated with the clothing brand Pretty Little Things, chooses to keep her relationship details private. Although her romance topic is highlighted in all media tabloids, Jama rarely speaks about it. But, Maya never misses hinting at her relationship.

In mid-2021, Maya’s romance rumors with Australian basketball player Ben Simmons began swirling. The rumors arose after Jama and Simmons were spotted together in several public places. Although the paparazzi caught them spending time together, neither Maya nor Ben confirmed their relationship.

Following a six-month-long whirlwind romance, Ben reportedly proposed to Maya with an engagement ring in December 2021. The sources told The Sun, “Simmons and Jama have been together for much less time, but, thankfully, she said yes. Ben was so excited, but they’ve decided to keep the news low-key and tell only those closest to them.”

Maya and her partner Ben is yet to announce their engagement publicly. But, at the moment, the pair are sharing a good bond and living a private romantic life. On February 8, 2022, Maya attended The BRIT Awards 2022 in London, flaunting her beautiful diamond ring.

The Circle co-presenter Maya was in a romantic relationship with Michael Ebenezer Kwadjo Omari Owuo Jr, Stormzy. Stormzy, 28, is a British rapper who has received prestigious accolades such as the BET Hip Hop Awards, BBC Music Awards, etc.

In an interview with VOGUE Magazine, Maya and Stormzy first “met at Red Bull Culture Clash in October 2014.” After the first encounter, the duo began friendships and soon started their romantic relationship in January 2015. In August 2016, Stormzy also dedicated the song ‘Birthday Girl‘ as a surprise to her 22nd birthday.

Everything was going fine; the presenter Maya and rapper Stormzy were sharing a healthy relationship. They lived together in South West London. However, in 2019, the pair decided to part ways after four years long dating. The reason behind their separation is unclear. But, the report claims Maya chooses her career over the relationship. However, neither Maya nor Stormzy has publicly confirmed the reason behind their surprise split.