Skip to content
Home » Entertainment » Is Vinny Dating Anyone

Is Vinny Dating Anyone 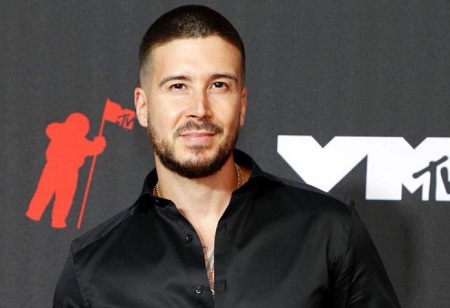 The reality star Vinny Guadagnino, aka Vinny’s prominence, rises to fame as a cast member of the MTV reality show Jersey Shore. The show ran from December 3, 2009, to December 20, 2012. Besides, Guadagnino is also popular for starring in the reality dating show Double Shot at Love.

The television actor Guadagnino is earning good recognition in his profession. He is also famous on social sites and has amassed millions of followers. But, what is the present relationship status of Vinny? Is he dating anyone, or is he living a single life? Know about his love life in the following sections.

Did Vinny Found True Love In Season Three Of Double Shot at Love?

As mentioned above, the 34-years-old reality star Vinny is the cast of the dating reality show Three Of Double Shots at Love. In the third season, another cast member, DJ Pauly D and his girlfriend Nikki Hall guide Vinny on his journey to search for his perfect match.

Vinny had to choose one woman from the three finalists in the finale, Emily “Peachy” Piccinonno, Erika Devito, and Akielia Rucker. After many ups and downs in choosing the perfect match, Guadagnino chooses Akielai Rucker. Upon selecting the 28 aged Rucker, she was declared the winner of season 3 of Three Of Double Shot at Love. The final episode was released on December 9, 2021, titled “Vinny’s Final Shot.” You May Like To Read: Brian Kraff

However, Vinny and Akielia did not continue their relationship outside the show. They have not shared any pictures on their official Instagram pages. It seems like he lives a single life without having any romantic affair. Guadagnino is still searching for the right person to start his love life.

The Staten Island native Vinny was in a relationship with the model Elicea Shyann. He and Elicea dated while filming the reality TV series Jersey Shore: Family Vacation. During his association with Elicia, he flirts with the strip club waitress, making Elicea “heartache.” Not only that, but he also said, “The waitress is like my wife. Oh, I loved her so much.

After all the incidents, Elicea got mad at Vinny. She also wrote, “Here’s some free promotion for the trash, everyone loves to watch. I’m a real f—king person who wakes up DAILY to more and more bulls—t and heartache,” in the now-deleted Instagram post. Vinny and Elicea ended their relationship in April 2018.

Vinny also dated the Double Shot Love season 1 winner Alysse Joyner. He also had a connection with another contestant, Maria Elizondo. However, Guadagnino eliminates Maria from the season. Later Maria made her appearance in season 2. At first, their relationship did not go well. After, they went on good terms. However, he and Maria never dated. Season 2 ended up being Vinny, a single man.

The College of Staten Island alum Vinny was spotted with YouTuber and reality star Francesca Farago. They were seen together having a romantic dinner date in New York City in July 2020. The 28 aged Farago moves on and hang-up with Guadagnino after a week of separation from her partner, Harry Jowsey, in June 2020.

Vinny and Francesa were enjoying each other’s company. Guadagnino and Farago also interacted on Instagram; they commented on each. Their closeness made their fans feel like there was something between them. However, they never confirmed their relationship status.

The 5-feet-7-inch (171 cm) tall reality star Vinny lives a luxurious life enjoying a $5 million net worth. His lavish lifestyle and vacation in exotic, expensive places can be seen on his Instagram post.

In 2017, he purchased the home in Hollywood Hills for $3.5 million. In August 2021, he listed the house for sale for $3.85 million. The 2,685-square-foot Mediterranean-inspired property has three bedrooms, three bathrooms, and vaulted ceilings, among other elegant materials.