James Fletcher Brooke Baldwin’s Husband: The Story Behind the Woman. 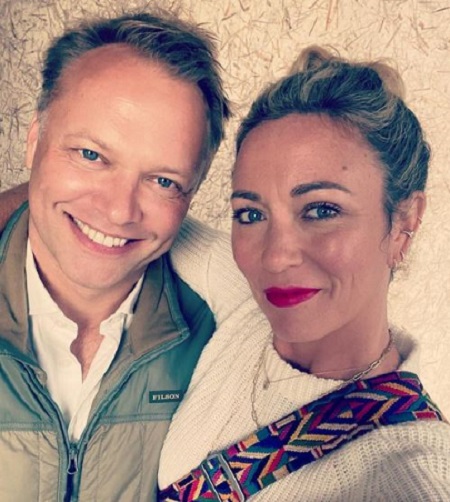 There is a saying, “behind every successful man there is a woman.” But what about successful women? Is there any person behind her success? Yes, every woman also has a man who supports, sustains her towards the journey of success. Among other’s James Fletcher is also the one who helps, cherishes his wife in every situation.

James Fletcher, the English director and producer, is non-other than the beloved husband of journalist, author, and Television personality Brooke Baldwin. Now, let’s know-how is James and Brooke’s marital life going? Are they planning for children? Know about it in the following sections.

Got Engaged During Vacation

The former CNN anchor Brooke and producer James first met one another at a holiday party in 2015 in New York City. After dating for more than two years, in July 2017, Fletcher proposed to Baldwin with an engagement ring. He popped the question during their vacation in Hawaii to celebrate her 38th birthday.

Brooke revealed the news of her engagement via Instagram post, captioning, “Back from vacation. Turns out we went to Hawaii to celebrate more than just my birthday. James Fletcher asked me to marry him! And I said YES!“

Got Married In An Intimate Ceremony

Following 10-months long engagement, James and Brooke decided to take their relationship to the next level and get married. They said “I do” in an intimate wedding ceremony on May 5, 2018. The wedding event was held at The Barn at Liberty Farms, New York, in front of their family members, friends, relatives, and close ones.

The bride, Brooke, chose an embellished gown designed by Indian-American fashion designer Naeem Khan for the big day. She accessorized herself wearing diamond earrings from Estate Diamond Jewelry. On the other hand, the groom, James, wore a black tuxedo to exchange the vows.

Since the wedding day, Mr. and Me. Fletcher shares a healthy bond as a perfect married duo. As of December 2021, the married couple has already celebrated their third marriage anniversary. Additionally, James and Brooke visit many exotic places together. They also never miss a chance to share pictures on their social sites.

Do James And Brooke Have Any Kids?

From the marital bond, Brooke and James haven’t shared any children. It seems like they have not planned their babies yet. However, James and Brooke are parents to Pugsley. They have a pug, a dog breed from China. Pugsley is 18-years-old.

Their pug also served as a ring bearer at Brooke and James’ wedding wearing a red bow tie. Pugsley travels various places with James and Brooke. He is often seen on her Instagram post.

Take A Look At James Profession

Likewise, James is also an associate producer of the documentary Children of the Snow Land (2019). The Nepalese/English documentary film shows the life of the Himalayas people of Nepal. The docu-film also won Best Documentary at the Victoria Film Festival.

On the other side, Brooke Baldwin is an American journalist. The 43 aged Baldwin served as an anchor of CNN Newsroom from January 2008 to April 2021. Brooke is also an author. She published her Huddle: How Women Unlock Their Collective Power book in April 2021. The book’s Kindle price is $12.99 at Amazon.