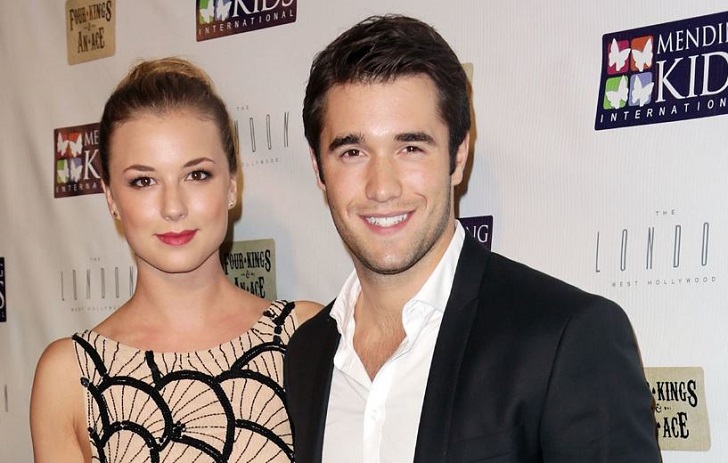 Joshua Tobias Bowman, aka Josh Bowman, is an English actor, who came to the spotlight after playing the leading role of Daniel Grayson in the ABC serial drama series Revenge. For the Breakout Performance in Revenge Josh also received Teen Choice Awards nominations.

Bowman is a qualified actor who studied acting at the Lee Strasberg Institute, New York. The Time After Time actor Josh was born on May 12, 1986, in Berkshire, England. Josh has a sister named Scarlett Bowman (b. December 10, 1985). Scarlett is also an actress known for playing Maddie Morrison in the British soap opera Hollyoaks.

The 6-feet (183 cm) tall British-born actor Josh’s acting career is growing prosperously. Like successful professional life, Bowman’s personal life is also blooming. The actor is in a blissful marital relationship with his wife Emily VanCamp. Get to know about Bowman and VanCamp’s wedding details below.

We have heard most entertainers find their love partner while filming. Same things happened to Make It or Break It actor Josh. He met his now-wife Emily VanCamp on the set of Revenge.

Josh and Emily began their romantic relationship in October 2011. On October 28, 2017, Emily shared an image with Josh, writing, “Happy 6 years to my favorite human. Time really does fly when you’re having fun.“

After five years long dating, Our Girl actor Bowman offered Emily an engagement ring in May 2017. The Captain American: The Winter Soldier actress also heartily accepted his proposal. VanCamp did not explain her engagement. But to flaunt a diamond ring she covered her face and simply use a ‘red heart emoji,’ sharing a snap on her official Instagram account.

The Falcon and the Winter Soldier actress Emily and the Lore actor Josh decided to share their marital life on December 15, 2018. Their wedding event was held in the Harbour Island, Bahamas, attended bride and groom’s family members and friends.

The actress was looking pretty in a Lela Rose‘s flower embroidered gown that featured a long veil. She preferred a low bun wearing a pearl necklace. Furthermore, she carried a white flower bouquet. Similarly, actor Josh wore a black tuxedo, a white shirt, and a black bow tie to tie the nuptial knot with his partner.

Emily shared their wedding photo, announcing their marriage, “Thank you to all of our friends and family who made their way to celebrate with us! We are eternally grateful. And to @lelarose and your incredible team for creating my dream dress. Thank you times a million.”

Josh Bowman, Father Of A Daughter

Josh and his beloved wife Emily shared a beautiful baby girl from their marital relationship. Their sweet daughter Iris Bowman was born in August 2021.

Emily announced Iris’ birth through Instagram, writing, “Welcome to the world our sweet little Iris. Our hearts are full.” As of now, Josh and Emily are jointly parenting their only kid. Like, Banks Violet Bair, Iris is also receiving fame as a celebrity kid.