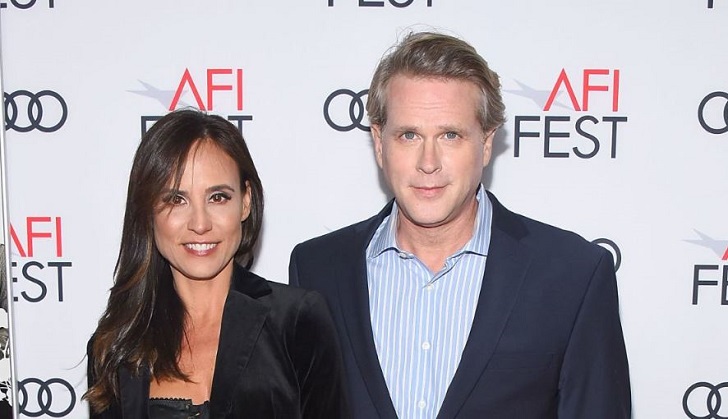 Lisa was born in 1971, in Agoura Hills, California, to her mother, late. Sandra Carol Kurbikoff and her husband, whose name is not mentioned. Her mommy died on March 16, 2015, at 74. Lisa celebrates her birthday on May 9. She has a twin sister named Janet Kurbikoff, who works as an interior designer at Malibu Market & Design. Janet is married to her husband, Eytan Levin. Her other sister Darlene Kurbikoff is a wardrobe stylist. Similarly, her other sister’s name is Donna Kurbikoff.

Besides her professional work, Lisa Marie constantly gets media recognition for sharing her intimate marital life with the actor Cary Elwes. Know the details regarding Lisa and Cary’s wedding life in the below subheadings.

Cary’s eminence as an actor rises after playing the title character in the adventure comedy movie Robin Hood: Men in Tights. Later, he appeared as Dr. Lawrence Gordon in the psychological thriller Saw, which became worldwide famous, earning $103.9 million at the box office at just a $1.2 million budget.

The 6-feet-0-inch (183 cm) tall Cary’s other incredible movie and TV show credits include Justice League, From the Earth to the Moon, The X-Flies, Psych, Cosmos: A Spacetime Odyssey, Stranger Things, The Riverman, Shadow of the Vampire, etc. Moreover, Cary is nominated for honorable awards such as Screen Actors Guild Awards, Satellite Awards, and Blockbuster Entertainment Awards.

They Have Been Together Since 1991

The photographer Lisa and The Princess Bride actor Cary began their romantic affair in 1991 after meeting for the first in a chili cooking competition in Malibu, California. Soon after the first encounter, Kurbikoffa and Elwes felt a romantic connection and soon began their relationship.

This adorable pair tied the wedding knot on June 25, 2000. Their intimate marriage ceremony was organized in the “South of France at L’Abbaye 10th century chapel in La Colle-sur-Loup.” Lisa and Cary’s friends and family members made their attendance at the reception.

Lisa Marie wore a sleeveless Vera Wang gown with a short veil on their big day. Cary walked down the wedding aisle wearing a black tuxedo. Since the wedding day, Mr. and Mrs. Elwes have shared a blissful marital life.

As of 2022, the merrily married pair have celebrated their 22nd anniversary. Sharing the picture from their big day, Lisa wishes her spouse Cary, writing, “22 years ago I married my best friend @caryelwes.” Similarly, Cary writes, “My actual princess bride to be… 22 years ago,” wishing his wife Lisa on their anniversary.

Cary and her wife Lisa shared an adorable baby girl from the marital bond. Their daughter Dominique Elwes was born on April 24, 2007. Lisa gave birth to Dominique in Los Angeles at Cedars Sinai Medical Center, weighing 7 lbs and 2 oz.

As of now, Lisa and her husband Cary are jointly parenting their daughter and even share pictures with her on their official Instagram account. Like, Naiia Ulrich, the 15 aged Dominique is also gaining media attention as a celebrity daughter.

Dominique graduated from 8th grade in June 2021 from Malibu Middle School, Malibu, California. Sharing the news, Cary wrote, “So proud of my baby girl @dominiqueelwes who not only graduated 8th Grade today but also received an award for “Excellence in Theater Arts.” All this through incredible hard work and adversity which she handled with grace and fortitude. Well done, Dommie. I love you!” Additionally, Dominique has an official Instagram account with more than two thousand followers.