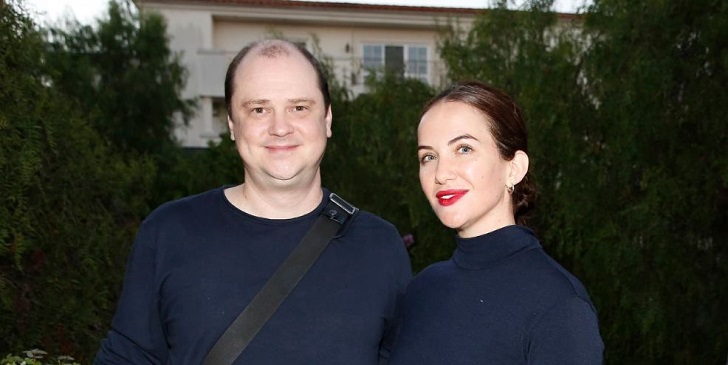 Mike currently works on an upcoming horror-mystery thriller film, The Midnight Club. He undoubtedly earns an impressive sum of wealth from his two-decades-long professional filmmaking career. Is Flanagan living a successful marital life like his professional life? Know about Mike and his wife Kate Siegel‘s married life in the following sections.

The 44-years-old Mike’s wife, Kate Siegel, 39, is an actress by profession. The 5-feet-8-inch (173 cm) tall Hollywood actress Siegel has appeared in most films and series by her husband, Mike.

Likewise, Siegel and Flanagan are working together on an upcoming horror drama series, The Fall of the House of Usher. Some sources report that Mike and Kate met in 2011 during an audition for one of his movies. However, it did not work out.

Two years later, in 2013, Flanagan chose Siegel on Oculus. In the psychological supernatural horror movie, Kate plays the role of Marisol Chavez, and Mike is the director and writer of the film. Since then, they have been together, sharing a healthy romantic relationship.

Following three years-long romantic relationships, Kate and Mike tied the wedding knot on February 6, 2016. Their intimate beach wedding ceremony was held in front of their close ones.

The bride wears a strapless white gown. On the other side, the groom, Mike, wore a light brown tuxedo to walk down the wedding aisle.

As of now, Mr. and Mrs. Flanagan share a healthy bond as perfect married pairs. They have already celebrated their 6th wedding anniversary merrily. Similarly, Doctor Sleep director Mike and his wife attend many public events together. Kate shares romantic pictures with her hubby Mike on her verified Instagram account.

Mike and his wife Katie shared two kids from the marital solid union. Their first child Cody Paul Flanagan, a son, was born on November 26, 2016. Similarly, the Hypnotic actress Kate and her husband Mike became parents for the second time on December 3, 2018, welcoming a daughter, Theodora Isabelle Irene Flanagan.

Mike and Kate are jointly parenting their son and daughter. Unlike other kids, Cody, 5, and his sister, Theodora, 3, are kept far from the spotlight. Besides Cody ad Theodora, Mike has a son named Rigby Flanagan-Bell, born through his former relationship with actress Courtney Bell.