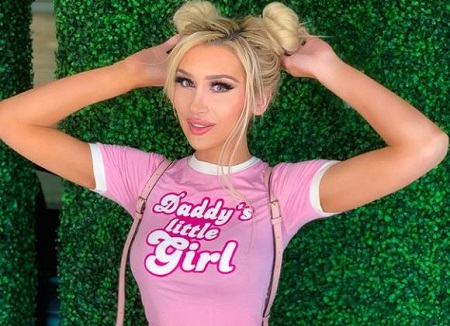 Molly Eskam is a swimwear model known for uploading lingerie pictures on her official Instagram account. Eskam is also a Playboy Playmate. The model has featured on the cover July 2020 Australia issue of Playboy Magazine.

The Scottsbluff, Nebraska native Molly is also a YouTube personality who has amassed more than 500 thousand subscribers on her self-named YouTube channel. Likewise, her Instagram account has 1 million followers. What about Molly’s personal life? Is the internet personality Eskam dating someone? Know about her love life.

The model Molly is also popular for her relationship with Brian Rafat Awadis, widely popular as Faze Rug. The gamer Faze Rug is the co-owner of the esports organization Faze Clan. Faze Clan’s official youtube channel has 8.68 million subscribers as of January 26, 2022.

In one of the videos with Molly, Faze Rug revealed he and Molly first met in 2015. After the first encounter, the duo shared a good bond. Later, it seems like they began dating in 2017. On August 1, 2017, Faze Rug shared a video with Molly where his thumbnail was, “SURPRISING MOLLY FOR OUR FIRST DATE!! *romantic*.”

Molly and Faze Rug uploaded videos featuring each other on their YouTube channel. However, in January 2018, they made a YouTube video revealing the truth regarding their relationship and break-up. In the video, they said, “Nothing bad happened between us. Non of us cheated each other.” Molly and Faze Rug choose to be friends. Even now, they share a friendly relationship.

The 23-years-old Molly recently ended her abusive relationship with her mysterious boyfriend. Through Instagram posts, Eskam opens about her being a victim of domestic violence and abuse.

On January 24, 2022, she uploaded a video of herself with wounds, broken glasses, towels and a washbasin full of blood.

She captioned the videotape saying,

“PART 1″ This is so hard for me to post… I am so broken domestic abuse is real. I am lucky to be okay. It’s hard to leave when you love someone. But doesn’t get better.”

Molly’s ex-boyfriend Faze Rug supported her. On the comment, he wrote, “Actually disgusting. You deserve way better. You’re an amazing person with positive energy ALWAYS. Keep your head up.” Similarly, the YouTuber Eden The Doll also shows her support.

Molly uploaded an audio clip of the person screaming at her in another Instagram video.