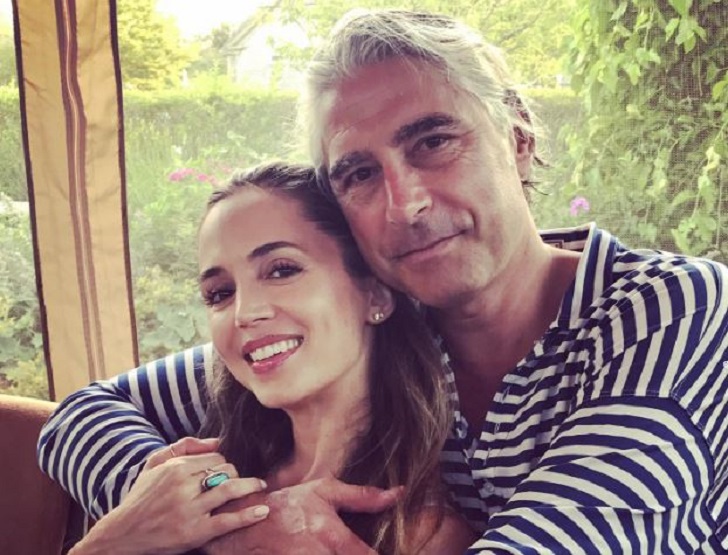 Peter Palandjian is living a successful business life. Palandjian is the President, Chairman, and Chief Executive Officer (CEO) of the Intercontinental Real Estate Corporation, Boston, Massachusetts. Peter previously worked as an associate at the management consulting company Bain and Company.

Peter received a bachelor’s Degree in Arts in English and American Literature from Harvard University. Later, he attended Harvard Business School, receiving an MBA degree. Palandjian’s marital life is also booming, like his professional career. After the first unsuccessful marriage, the businessman currently shares a blissful wedding life with his now-wife, who also has a taste in business.

Who Is Peter Palandjian’s Wife? Where Did They Meet?

The 58 aged Palandjian’s wife is no other than Eliza Dushku, an actress who also runs a Boston Diva Productions production house. The Watertown, Massachusetts native Eliza has showcased how successfully she handles her professional acting life.

The 41-years-old Eliza is famed for her portrayal of Faith Lehane in the supernatural drama series Buffy the Vampire Slayer and Angel. In the Best Actress category for the series, Tru Calling Dushku received Saturn Award nominations, where she played the leading role of Tru Davies.

Peter and Eliza had their first meeting in 2015 in Boston. In 2020 The Saint actress graduated from Lesley University. Announcing the news through an Instagram post on May 16, 2020, Eliza wrote and mentioned her first encounter with Peter, “I moved back to Boston almost 5 years ago with a few credits under my belt & some fierce determination to complete my BA. Along the way I met the love of my life (Peter P!), who has rooted me endlessly, with my beautiful family.“

Their Marital Life Since 2018

After the first encounter, Eliza and Peter started sharing an intimate relationship. Following several years of dating, Palandjian proposed to his girlfriend Dushku in June 2017. The actress revealed her engagement news via Instagram, saying, “#AYO…! YES!! Absolutely, my love.”

After a year, the Locked In actress Eliza and CEO tied their wedding knot on August 18, 2018. Their intimate wedding ceremony was held in Boston, Massachusetts, an event managed by Rafanelli Events in attendance of their dearest ones.

On the big day, the bride, Eliza, wore a beautifully embroidered sheath wedding gown keeping her hair down and wearing a short veil. And the groom, Peter, a navy blue tuxedo with a white shirt and black shoes. The couple also held a Boston Bike Party event at their wedding.

The actress shared her marriage news after a month on September 16, 2018, sharing wedding images, writing “8.18.18” in the caption. Since the wedding day, Mr. and Mrs. Palandjian have been living a blissful marital life. The husband-wife duo has celebrated their fourth marriage anniversary. Peter is not active on any social networking sites, but Eliza sometimes uploads pictures with her hubby Peter on her official Facebook and Instagram accounts.

On March 27, 2019, Mrs. Palandjian shared her baby bump picture on Instagram, writing, “we got love for everyone.” Peter and Eliza’s first son Philip Bourne Palandjian, was born in August 2019. She shared the image of newborn Philip with Peter, saying, “Our BABY #Bourne. Can you feel the love, Philip “Bourne” !? So [blessed] for all this love.”

Similarly, via Instagram, Eliza shared the news of her second pregnancy in February 2021, writing, “Mama x 2..” Later, Peter and Eliza welcomed their son Bodan Palandjian in August 2021. However, they have not revealed Bodan’s face yet. Peter and his wife Eliza are privately parenting their children.

Additionally, entrepreneur Peter has three daughters, Madelon, Manon, and Margot Palandjian, and a son named Petros Palandjian, born via his previous marital relationship. He was married to his first wife, Marie-Louise “Minou” Palandjian. However, the details of Marie and Peter’s wedding and separation are missing.