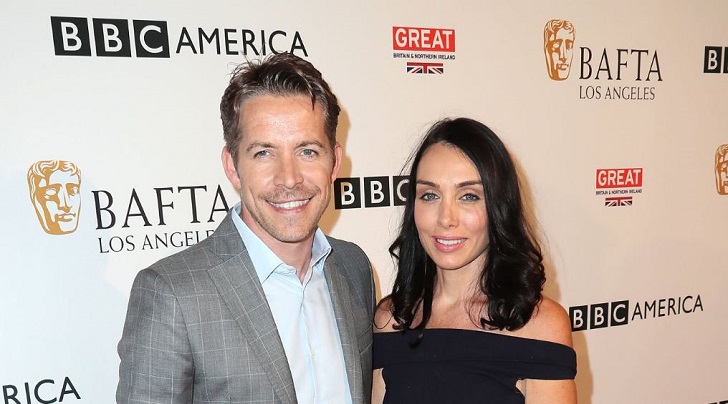 Sean Maguire is a professional actor who holds British/American nationality. His appearances in movies and TV series are like by everyone. Among other characters, Maguire’s role as Aidan Brosnan in the BBC soap opera EastEnders added eminence to his acting jobs. The actor’s character as Robin Hood in the fantasy adventure drama Once Upon A Time is also appreciable.

The Timeless star was born in Ilford, London, England, on April 8, 1976, to Kathleen Maguire (mother) and Michael Maguire (father). He has five siblings, brothers Ciaran Maguire, Darren Maguire, and sisters Ellie Maguire and Katie Maguire, others names are unavailable. His parents, Kathleen and Michael, are the founders of Maguire O’Shea Academy of Irish Dancing, Ilford.

Sean not only gathers fame from his profession but also makes impressive money. The entertainer is married to his wife, Tanya Flynn. Know the details of their wedding life in the following sections.

The 46-years-old actor Sean is in a marital relationship with his wife, Tanya Flynn. Nothing much is known about Tanya’s profession, but as per the sources, she is a police detective. Sean and Tanya tied the wedding knot on October 19, 2012.

Two years later, on October 19, 2014, Tanya shared the image from their wedding to wish her husband Sean on their 2nd wedding anniversary on Twitter. She wrote, “Happy anniversary @sean_m_maguire. If I had my life 2live ova again next time, I would find [you] sooner so I could <3 you longer.”

The Meet the Spartans actor Sean re-married his wife Tanya at the end of 2014. Tanya wore a beautiful fishtail gown carrying a lavender flower bouquet for the big day. On the other hand, Sean wore a black tuxedo with a white shirt and a back bow tie.

Mrs. Maguire revealed the news of their second wedding, uploading a beautiful morning view on her Twitter account. “Happy wedding day to [you] @sean_m_maguire. I love you. Now let’s get this party started!! #kerrysunrise,” she wrote for the caption. Also, their friend Marc Kanye wishes them, sharing the image of them (Sean and Tanya) walking down the aisle, writing, “Congrats to the Maguires!!! Amazing wedding! Happy to celebrate this special day with u! @sean_m_maguire [and] @TANYAJFLYNN.”

Also, know the marital status of Once Upon A Time actor Gabrielle Anwar.

As of now, Mr. and Mrs. Maguire share a blissful marital bond without making rumors regarding the separation. They will soon celebrate their 10th wedding anniversary.

The singer Sean who has released Sean Maguire, Spirit, and Greatest Hits albums, is the proud father of three adorable kids. The Now I’ve Found You singer Sean and his wife Tanya welcomed their first baby, a son, Flynn Patrick Maguire, in 2015.

Likewise, Seana and Tanya’s second son Leo James Maguire was born in December 2017. Sharing the picture with the newborn Leo, Sean writes, “Thank you to my incredible wife for giving me the best Christmas present imaginable. Leo James Maguire,” on his Instagram.

The Maguire family of five is living the limelight life. The family travels together, and Sean never misses a chance to capture their beautiful moment and upload it on his Instagram handle.