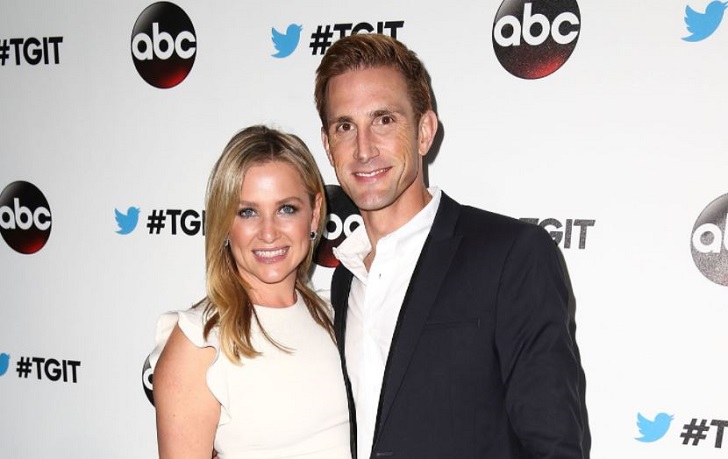 The Hollywood actress Jessica Capshaw was born on August 6, 1976, to Kate Capshaw and Robert Capshaw. Being born to the famous actress Kate, Jessica began earning fame since her birth as a celebrity daughter. However, Jessica is now following in her mother’s footsteps and is successfully establishing her name in the Hollywood industry.

Jessica’s prominence rises to fame after playing the leading character of Dr. Arizona Robbins in the medical drama series Grey’s Anatomy. With the growing reputation in her professional career, Capshaw’s marital life is also searched in the media. Now, let’s find out how is Jessica’s marital life is going in the following sections.

The Practice actress Jessica met her now-husband, Christopher Gavigan, in the early 2000s. After the first encounter, Capshaw and Gavigan shared a good bonding and began their romantic relationship.

Concerning Jessica’s spouse Christopher’s professional work, he is a businessman. The University of California graduate Christopher is the founder and Co-CEO of Prima, a science-led plant therapeutics brand. Similarly, Gavigan’s Linkedin profile suggests he is a co-founder of The Honest Company.

After more than two years long dating, Jessica and Christopher tied the wedding knot on May 22, 2004. Their intimate wedding ceremony was held at her parents’ East Hampton estate. Since the big day, Jessica has been living a blissful marital life with her husband, Christopher.

As of now, the Gavigan family of six is living limelight and blissful life. The 45 aged actress Jessica and her spouse Christopher are jointly parenting their kids. Furthermore, the kids are often seen on the post uploaded by Jessica and Christopher on their social sites.