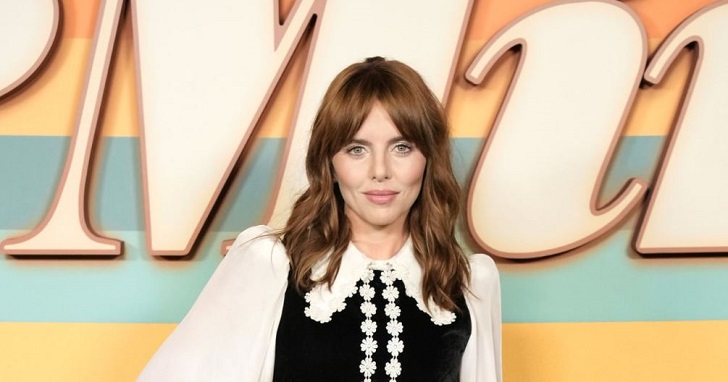 The British actress Ophelia Lovibond is widely receiving fame for her professional acting career. Lovibond received a degree in English Literature from the University of Sussex. Moreover, she has been a member of the acting industry since 1999.

The 5-feet-2-inch (157 cm) tall actress Ophelia is popular for playing Joyce Prigger in the comedy streaming series Minx. Likewise, her other acting credit includes Elementary, Guardians of the Galaxy, Thor: The Dark World, and various others.

Lovibond recently shared her marital life with her partner for a long time. Find out the detailed information regarding the marriage in the following sections.

The 36-years-old actress Ophelia is living a blissful marital relationship with her beloved husband. She tied the wedding knot with her longtime partner-turned-spouse, Henry Pettigrew in a romantic wedding ceremony that she defined as her ‘dream wedding.’

Henry and Ophelia walk down the wedding aisle on May 3, 2022, held at Wilton’s Musical Hall in London. Similarly, their family members, friends, and relative attend the wedding reception and were entertained by Big Gospel Choir.

For the big day, the bride Ophelia wore a stunning satin gown with a bow frill from Halfpenny London by Kate Halfpenny. Similarly, her hair and make-up were managed by Justine Jenkins and Liz Taw. Likewise, Ophelia carried a colorful flower bouquet from Worm London. On the other side, the groom, Henry dashes the wedding look wearing black suit pants, a white shirt, and a black bow tie.

The couple shares the news of their wedding through an Instagram post. Sharing a series of pictures from the wedding Ophelia wrote, “Dream wedding, dream man, dream dress, dream flowers, dream food, dream music, dream guests, dream day. Still have not sunk in how spectacularly special it all was.” #dreamday #hitched.”

Like Ophelia, her hubby Henry is also an actor by profession. Pettigrew has made his appearance in movies and TV shows such as The Vineyard, Guilt, Death in Paradise, The Danish Girl, Aftermath, Line of Duty, and others.

Similarly, Henry received his training at Guildhall School of Music & Drama. He has experience working in theatrical shows such as The Erpingham Camp, The Bevellers, Black Watch, Straight, Troilus & Cressida.

The actress Ophelia and actor Henry first met during the rehearsal of the theatrical show, The Effect. In the play, Lovibond and Pettigrew portray the role of the couple. After the first encounter, they shared a good bond and began a good romantic relationship.

Following several years of dating, Henry proposed to his girlfriend Ophelia with an engagement ring in May 2021. He popped the question with an emerald ring from Ivy Nixon Jewellery. Lovibond shared their engagement news via Instagram, writing, “#engaged #overthemoon #emerald.“