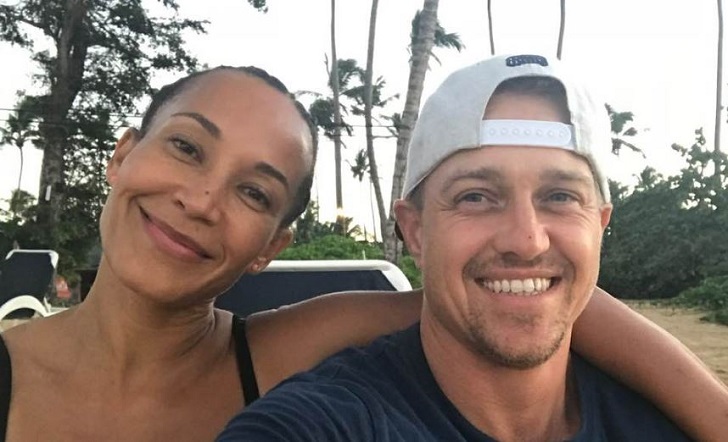 Rachel Luttrell is a native of Dar Es Salam, Tanzania. At five, Luttrell, her parents, Veronica Makihio Shenkunde Luttrell, Dr. William Leon Luttrell and her three sisters emigrate to Canada. Rachel, a dual nationality (Tanzanian/Canadian) holder, has worked as an actress since 1986.

The 5-feet-4-inch (163 cm) tall actress is famous for playing Teyla Emmagan in the Stargate Atlantis. Luttrell’s other movies and TV series credits include Arrow, Zombieland: Double Tap, Street Legal, and others.

Who Is Rachel Luttrell’s Husband?

The 51 aged Rachel is in a blissful marital relationship with her husband, Loyd Bateman. Luttrell’s beloved husband Bateman is a stunt double with experience working in several successful films and series. The 45 aged Loyd has worked as a stunt performer and coordinator in Blood Ties, X-Men: The Last Stand, Avengers: Infinity War, Fast & Furious Presents Hobbs & Shaw, etc.

Similarly, Loyd has appeared as a soldier in the adventure and military science fiction series Stargate Atlantis. Likewise, Luttrell and Bateman have worked together as Terrified Woman In Snow and stunt coordinator in the zombie comedy film Zombieland: Double Tap.

The NCIS: Los Angeles cast Rachel and her now-husband Loyd first met through their mutual friend and began dating in 2004. Following a year-long dating, Bateman proposed to Luttrell with an engagement, and she also merrily accepted his proposal.

Walked Down The Wedding Aisle In 2006

The lovebirds exchanged wedding vows on September 22, 2006. Their wedding ceremony was held privately in front of their close ones. So, the detailed information regarding the marriage is missing.

Since the big day, Rachel and her husband Loyd have lived merrily, supporting each other as perfect married pairs. The husband-wife duo is also an active social media user who never misses a chance to share adorable pictures. Similarly, Loyd and Rachel have already celebrated their 15th wedding anniversary, and still, the bond is going strong.

Likewise, Rachel’s daughter Ridely, 9, is a child actress with experience working in Lou, Shattered, and Shelter in Place. Ridely and her elder brother live a joyous life with their celebrity parents. They often feature on the post updated by them on their social networking sites.