Skip to content
Home » Entertainment » Toby Kebbell And His Wife, Parents To Their Daughter

Toby Kebbell And His Wife, Parents To Their Daughter 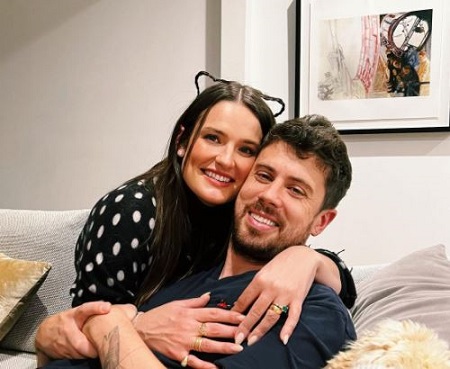 The West Yorkshire, England native Tobias Alistair Patrick Kebbell, widely popular as Toby Kebbell, is a successful actor. Since 2000, Kebbell has been featuring in various movies and TV shows. Toby is nominated for Dead Man’s Shoes, his debut film, for the British Independent Film Awards.

Toby is also famous for playing Dr. Doom in the superhero film Fantastic Four. He earns an impressive sum of wealth from his flourishing professional career, enjoying $6 million as early 2022. People are also curious about his private marital life because of a massive hit in his professional life. Read the article till the end to know about Kebbell’s married life.

Who Is Toby Kebbell’s Wife Arielle Wyatt-Kebbell? Their First Met

The 39-years-old actor Toby is quite secretive regarding his personal life. He is also not active on any social sites. However, Kebbell’s wife Arielle Wyatt-Kebbell sometimes mentioned their happy marital relationship via her Instagram post.

Arielle is also an actress featured in films like When The Shadow Falls and Lifeline. Also, Wyatt is the producer of the short film Lullaby (2019).

Toby and Arielle first met one another in 2014. After the first encounter, the duo shared a good bond and soon began their romantic relationship. Since then, their relationship has been smooth and robust without creating rumors about the separation.

The Control actor Toby and his long-time partner Arielle tied the wedding knot on April 15, 2020. The pair exchanged the wedding vows privately at 2020’s lockdown due to the COVID-19 pandemic.

The detailed information regarding their marriage ceremony is unclear. However, Arielle revealed their wedding four months later via Instagram post.

“I’m not one to normally post intimate details of my personal life. But four months ago I married my best friend and the love of my life. We never managed to stay away from each other for long, but finally, it was our time again, and I couldn’t be happier to spend the rest of my life with this beautiful human. #QuarantineWedding.”

As of now, Mr. and Mrs. Kebbell are living a blissful marital life privately.

From the marital bond, Arielle and Toby shared an adorable baby girl. On September 14, 2020, Arielle shared her baby bump picture, saying, “Baby on Board #GotBusyInQuarantine.” The exact birth date of their daughter Ophelia Kebbell is unknown, but as per Arielle’s post, she was born in 2021.

Their daughter’s unique name ‘Ophelia’ derives from the Greek word, which means “help.” The one-year-old Ophelia is also kept far away from the spotlight. Her parents (Toby and Arielle) have protected her from media attention. Arielle sometimes shares a back, head picture of Ophelia on her Instagram account.