Who Is Mia Scholink? Details Regarding An Instagram Star 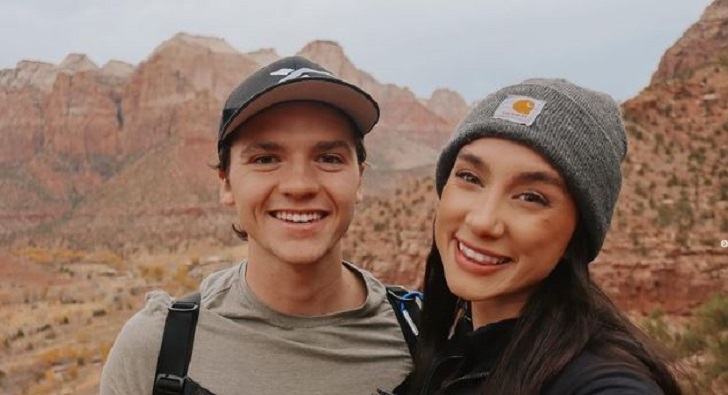 Mia Scholink is an Instagram, with more than 300 thousand followers on her verified self-named Instagram account. She influences people through sharing lifestyle, fashion and beauty content. As per Mia’s Linkedin profile, she is the Independent Beauty Consultant at the cosmetic company Beauty Counter.

Besides earning fame as an Instagram sensation, Mia is getting wide media recognition as a celebrity wife. Scholink is no other than the spouse of American entertainment star Joel Courtney. How is the pair’s marital life going? Know the details regarding their marriage in the following sections.

The Instagram star Mia was born on June 15, 1997, in California, USA. She is the daughter of Larry Scholink and Shonna Scholink. Mia’s father, Larry, is an investor based in Gilbert, Arizona. Per his Facebook profile, he is the president of the real estate sales and property management company, Premiere Properties of Carmel.

Mia has two sisters, Meagan Scholink Bickings and Anna Scholink. Similarly, she has brothers named David Scholink and Nate Scholink. Meagan is an esthetician who works at Blink Esthetics. She is in a marital relationship with her husband Conrad Bickings and has two sons, Westin Bickings and Walker Reed Bickings. The Scholink siblings of five share a close bond and never miss a chance to share pictures on their respective social sites.

Mia’s prominence rises to fame by sharing her intimate life with Hollywood actor Joel Courtney. The 6-feet-0-inch (183 cm) tall California native Joel has been actively working as an actor since 2010.

The 26 aged Courtney is better known for playing the main role of Lee Flynn in Netflix’s successful teen romantic comedy film The Kissing Booth and its sequel (2 and 3). In the Vince Marcello-directed film series, stars such as Meganne Young, and Jacob Elordi, have made their appearances.

Joel is also famous for featuring in his debut movie Super 8. He also received a Saturn Award for Best Performance by Young Actor. Courtney’s other films and TV shows credit include The Empty Man, Dear Eleanor, Agents of S.H.I.E.L.D, The Messengers, Assimilate, etc. Moreover, Joel works as Greg Laurie in an upcoming film Jesus Revolution.

Mia Scholink and Joel Courtney Together Since Childhood

The social media personality Mia and The Haunting Hour cast Joel are friends turned partners who have known each other since childhood. In an interview with People, actor Joel said,

“My parents knew Mia’s parents before either one of us were born. We hung out for three or four years running around in diapers and play dates — not just us, but our siblings.”

Later, Joel moved to Idaho, Moscow, with his parents [he mentioned in the video uploaded on their Youtube channel].

Afterward, Scholink and Courtney “reconnected in 2015 and began dating in 2017.” He added, “We dated for a year and we broke up for a little bit of time and then started dating again in 2019 and it moved really quick after that.”

Following a year-long dating, the Tom Sawyer & Huckleberry Finn actor Joel proposed to Mia on February 14, 2020. Courtney popped the question getting down on his knees in Manhattan Beach, California. The couple revealed their engagement news through Instagram posts.

Flaunting a diamond ring from Brilliant Earth Jewelry, Mia said, “ENGAGED to my best friend!!! Can’t wait to marry you @joelcourtney #engagement #justsaidyes.” Likewise, Joel posted an image of their engagement, writing, “I like it, so I just had to go and put a ring on it. #valentinesday #proposal #she’smyfiance #beyondblesses #overthemoon.“

Got Married In Arizona

Joel and Mia did not delay taking their relationship to the next level after sharing an engagement ring. They tied the wedding knot on September 27, 2020. The intimate wedding ceremony held in Phoenix, Arizona, was attended by family members, relatives, and friends.

For the big day, the bride Mia chooses a sleeveless floor-length Demetrios Bride embroidered gown. Similarly, Natalie Mas and Taylor Lamb Hair handled her make-up and hair. Likewise, the bridesmaids wore a thin strap silk satin dress, Show Your Mumu. On the other side, the groom, Joel, wore Emporio Armani’s black tuxedo to walk down the wedding aisle. The groomsmen dash their looks in SuitShop tuxedos.

Furthermore, Mia and Joel also shared their wedding video on their official Youtube channel (Joel&Mia Courtney). They have more than 94 thousand subscribers and share fun QnA and other entertainment videos. Since the big day, Mr. and Mrs. Courtney have been living a healthy marital relationship. Their romantic bonding can be seen on their official social sites. Additionally, the married pair has yet not shared the news that they are expecting their first child.

Who are your favorite Instagram and social media personalities? To know about your favored stars, stay tuned with Favebites