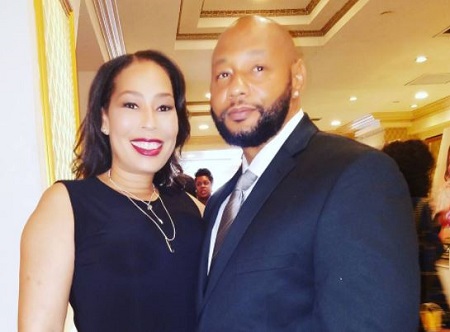 Alexandrea Martin, known as Alex Martin, is an American actress. Martin’s debut film is Sister Act 2: Back in the Habit, where she played the role of Classroom Kid. Alex’s other movies and TV shows credit include Call me Claus, Quest of the Delta Nights, etc.

Besides the professional work, Alex is also gaining fame as a celebrity kid. She is non-other than the only daughter of actress, comedian Caryn Elaine Johnson, aka Whoopi Goldberg.

The Miss Golden Globe Alex is in a blissful marital life with Bernard Dean. Alex’s husband Bernard is a producer by profession. Dean has worked as an executive producer of the film Sensitive Men.

How and when Martin and Dean met one another is unclear. But, they dated several years before exchanging the vows on October 15, 2011. Their intimate wedding ceremony was held in Las Vegas. Additionally, it is reported that Alex and Bernard 2011’s marriage was a reconciled wedding.

Since the wedding day, Mr. and Mrs. dean are sharing a good bond as perfect married partners. The married duo has already celebrated their 10th wedding anniversary. Additionally, Alex is not active on any social sites. But, Bernard never misses a chance to share pictures with her on his Instagram account.

Before tieing the wedding knot, Alex and Bernard shared two adorable kids. Their first child, a daughter Jerezy Dean was born on November 13, 1996.

Similarly, Alex and Bernard became parents for the second time in September 1998 by sharing a son, Mason Dean. Their son Mason, 23, is a model manage by the Margaux The Agency.

Grandmother To A Pretty Granddaughter

Before starting a relationship with Bernard, Alex was in a romantic relationship with HJ in her high school days. The detailed information regarding her then-partner is unknown, but it is reported that he is half Vietnamese.

Alex and HJ first met in Berkeley and began their relationship. But, Martin’s parents, Whoopi Goldberg and father, Alvin Martin, rejected him. Alex gave birth to her first daughter Amarah Skye from the relationship in November 1990.