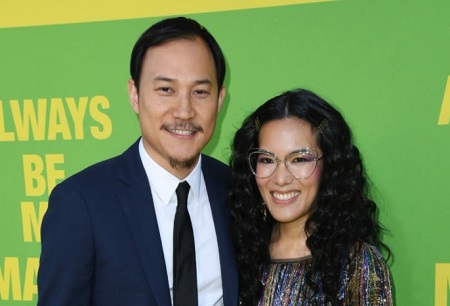 Ali Wong is widely gaining popularity as a comedian, exclusively seen wearing glasses. Wong is famous for Netflix’s stand-up comedy special Hard Knock Wife and Baby Cobra. The actress-comedian has made her appearance in movies and TV shows such as Always Be My Maybe, American Housewife, etc.

Wong’s successful professional career has become a way to live a limelight life. Besides, actress-comedian Ali is also a writer and producer. She is earning an impressive sum of wealth from her profession. As of early 2022, Ali has an estimated net worth of $3 million. But, what about her marital life? Know about actresses’ marital status and husband in the following sections.

Who Is The Comedian’s Husband, Justin Hakuta?

The 39-years-old Big Mouth actress Ali is in a blissful marital relationship with her husband, Justin Hakuta. As per Justin’s Linkedin profile, from January 2017 to February 2019, he worked as a Vice President (VP) of a healthcare company, GoodRx.

Before working as VP, Hakuta previously served as senior product manager of the company from August 2016 to January 2017. Justin received his BS degree from Carnegie Mellon University. Later, in 2011 he earned an MBA degree from Harvard Business School.

Besides, Justin is also famous as the son of Ken Hakuta. Ken is the Japanese/American TV Personality and inventor. The 71 aged Ken is widely renowned for hosting an invention television show, The Dr. Fad Show.

The businessman Justin and entertainer Ali first met in 2010 at a mutual friend’s wedding party. After the first encounter, Wong and Hakuta talked to each other, shared an excellent bond, and soon started their romantic affair. The pair have been inseparable ever since.

Following more than three years long dating, Ali, and Justin decided to take their relationship to the next level. On November 27, 2014, the couple tied the wedding knot in San Francisco, California. Before exchanging the vows, Ali and Justin also signed a prenuptial agreement, written in her book, Dear Girls.

Since the wedding day, Mr. and Mrs. Hakuta are sharing a healthy bond as perfect married partners. The married duo has already celebrated their 7th wedding anniversary. The couple is not a social media person. They rarely share pictures of one another on their social sites.

Furthermore, from the marital relationship, Ali and her husband Justin shared two adorable girls. She gave birth to her first daughter Mari Hakuta in September 2015. Similarly, their second daughter Nikki Hakuta was born in September 2017.

Mari and Nikki are kept far away from the spotlight, unlike other star kids. Ali and Justin have kept the details regarding their daughters private. Also, they did not share full-face pictures of girls on their Instagram account.