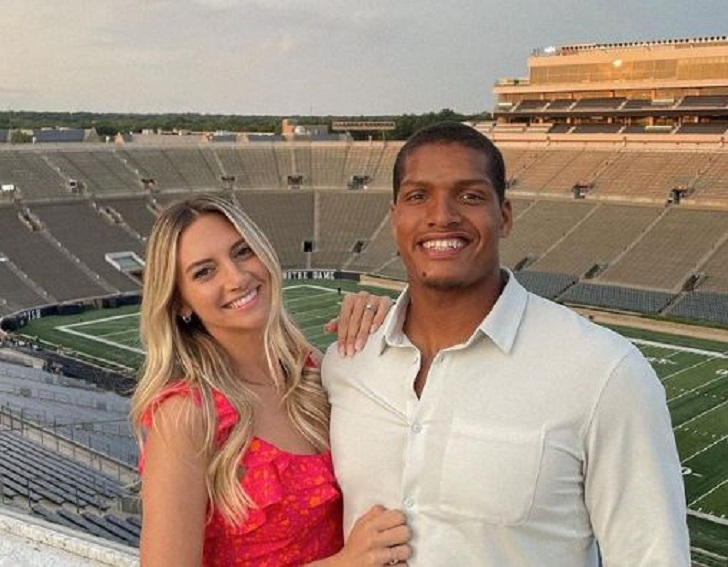 Among other outdoor games, football’s craze is increasing day by day. Which is your favorite National Football League (NFL) Team? If you are a Cleveland Browns fan, Isaac Rochell might not be the new name for you. The 6-feet-4-inch (193 cm) tall Rochell is a defensive end for NFL’s Cleveland Browns.

Isaac is pursuing a better career as NFL Player. Now, let’s find the detailed information regarding Isaac’s love life and personal details in the following sections.

Allison joined the University of Michigan in 2013 to study Interior Architect and Design and graduated in 2017. Kuch is a social media influencer especially popular for uploading pranks, comedy, and vlog-like videos on Tiktok. Allison has amassed 1.3 million followers with 74 million likes on her official Tiktok account (@allisonkuch).

Similarly, the blonde beauty has over 85 thousand followers on her Instagram account. Likewise, Kuch also has a Youtube channel with 27.3 thousand subscribers. There she shares travel and lifestyle vlogs. Besides Allison and Cleveland Browns’ defensive end, Isaac hosts a podcast called Babe and Braids with Allison + Issac.

The social media star Allison and former Los Angeles Chargers player Isaac first met “while out at a Notre Dame house party.” Kuch and Rochell explained their first meeting at their Babe and Braids podcast, which is available on her Youtube content.

Isaac and Allison shared a good bond after the first meeting and started dating in 2014. They were from different places, so they remained a long-distance couple for four years before they started living together in 2018.

After nearly six-year of dating, Isaac surprisingly proposed to Allison. Isaac tells Allison’s parents about his mindset toward proposing to her. After receiving a blessing from her mother and father, Rochell prepared for the surprise proposal.

Isaac planned to host a ‘Better Half’ podcast with another NFL player and his partner to pop the question on July 25, 2020, at Pasea Hotel & Spa, California. In the middle of the conversation, Isaac got down to one knee and proposed to his longtime girlfriend with a diamond engagement ring. Allison also merrily accepted his proposal.

The couple shares their engagement news via social media posts. Flaunting an engagement ring, Allison captioned a series of images saying, “I SAID YES!” Similarly, Isaac shared the news captioning, “Here’s to the rest of my life with the most amazing women I’ve ever met. I love you, @akuchh.” Moreover, Allison also uploaded an engagement video on her Youtube channel.

All About Isaac Rochell And Allison Kuch’s Destination Wedding

Allison and Isaac take their relationship to the next level by marrying on April 11, 2021, following 10-months long engagement. They exchange the wedding vows in a beautiful intimate outdoor ceremony held at Acre Resort in Cabo, Mexico. Their close friends, family members and relatives attend the wedding reception.

The wedding and event planner ‘Fawn Events‘ managed their wedding. Similarly, the photographing company The Times We Have handled their wedding photography. Likewise, the videography was operated by Wild Oak Films.

To walk down the wedding aisle bride, Allison wore a beautiful A-line sleeveless embellished gown from Essense of Australia. She paired it with a long veil and carried a beautiful flower bouquet from Pina Cate. Likewise, her hair and make-up were managed by Los Cabos Makeup. Similarly, the groom, Isaac, chose to wear a light brown tuxedo with a white shirt, a white tie, and dark shoes to tie the wedding knot.

Moreover, the bridesmaid’s dress was from Birdy Grey, and the groomsmen’s wardrobe was from The Black Tuxedo. Furthermore, their wedding video is available on her Youtube channel.

As of now, Mr. and Mrs. Rochell are sharing a healthy marital relationship. Allison and Isaac spend quality time together, travel, and never miss a chance to share adorable pictures on their official social sites. Similarly, Allison attends every NFL game of Rochell to cheer him and his team. Likewise, Isaac can also be seen on most of the videos uploaded by his spouse on her Youtube.