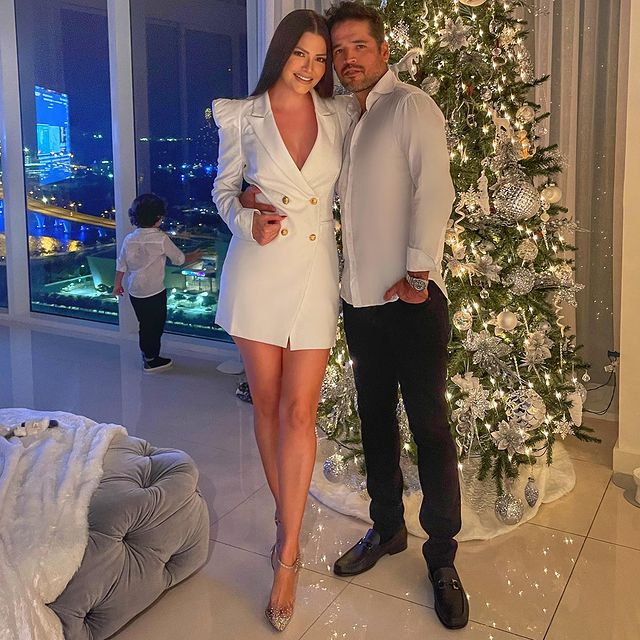 On the other hand, Ana Patricia Gamez is a diva who has won a Mexican beauty contest.

Following a year of engagement, the Mexican native couple Ana and Luis decided to be forever together. Their wedding was typical Mexican tradition in the beautiful city of Mexico, Guadalajara, in May 2014. Their wedding was colorful-themed, and Jesus Alarcon, the wedding planner, was the decorator.

Luis wore a traditional Mexican Charro for the wedding, and Anna wore a fitted white backless dress with embroidered details on the train. Adan Terriquez designed her dress. Moreover, Ana’s hair was done by none other than her mother-in-law herself, whereas her makeup was done by her makeup artist of Desperita America TV.

For jewelry, she wore fewer accessories like a small cross-neck chain and eartop. Furthermore, the couple grooved their legs in the Gangnam Style dance in the evening. Also, they shared a lot of joys, smiles and kisses to express their love. So, we can assume their typical Hispanic wedding was a fun event.

Ana Patricia Gamez is a successful model and diva. Gamez has won a Mexican beauty contest, Nuestra Belleza Sonora, in 2005. Furthermore, she was also the winner of Univision’s beauty contest in 2010. What’s more, the diva is a TV host of Enamorandonos, which premiered in 2019.

Besides, Ana often posts glamorous and stylish pictures on her social. That’s maybe why she has many followers on her Ig account. The diva also shares tips to look glamourous on Holidays and maintain a fit body. Comparatively, her husband, Luis Carlos Martinez, is an introverted person who lives a life away from the media sphere.

Accordingly, the couple opened a fashion and styling boutique, Beashion Boutique. The store offers a wide variety of dresses, tops, and accessories. Ana also likes to decor her house herself, especially at Christmas, as it’s her favorite holiday.

On top of that, the diva goes extra celebrating birthdays and anniversaries whose glimpses she posts on her social media profile.

After a year of marriage, Ana gave birth to her first child in 2015. They have named their firstborn daughter Giulietta Martinez. Currently, the baby girl is six years old. Similarly, the couple again became proud parents of their second child.

Their second child was a baby boy born on July 10, 2018. Further, they named him Gael Leonardo Martinez Gamez. Currently, the baby boy is three years old. Both their kids were born in the city of Miami. Ana often posts her kids on her Ig account. Likewise, she has opened the IG account of both the kids, which she handles herself.