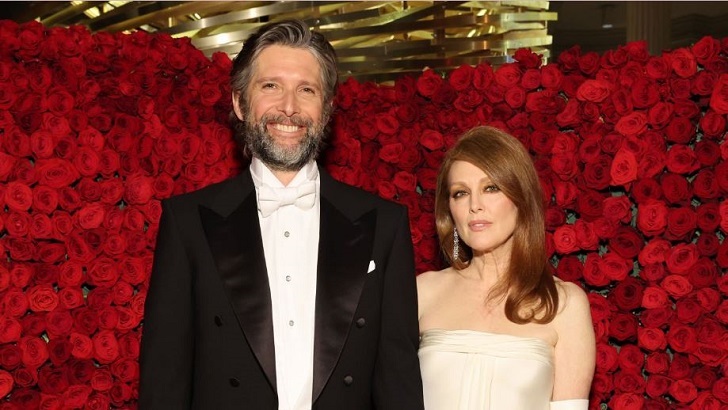 Bart Freundlich is a successful filmmaker in the Hollywood Film Industry. Freundlich has directed, written, and worked as a producer in several famous movies and TV shows. Bart is best known as the director, writer, and co-producer of the drama film The Myth of Fingerprint. He also won the Audience Award at Deauville Film Festival for the movie.

The movie maker is a native of Manhattan, New York City, born on January 17, 1970. He was born Bartholomew Freundlich to marketing consultant Debbie Freundlich and publisher Larry Freundlich. Bart attended the New York University’s Tisch School of the Arts, receiving a double degree in Cinema Studies and Film and Television production.

The 61-years-old Julianne is a well-established American actress captivating a wide range of fans through her movies and TV series appearances. Moore started her acting career playing Carmen Engler in the mystery crime drama series The Edge of Night (1984). Later the year, she began establishing herself in the entertainment endeavor after portraying Frannie/Sabrina Hughes in the CBS soap opera As the World Turns. She received her first Daytime Emmy Awards also.

Similarly, Julianne is also identified for her role as Dr. Alice Howland in the 2014 drama film Still Alice. She was honored with an Oscar Award in the Best Actress category. Also, she is famed for appearing as Dr. Sarah Harding in The Lost World: Jurassic Park. Her other movie and TV series credits include Short Cuts, Savage Grace, The Hunger Games: Mockingjay, The Glorias, 30 Rock, Game Change, The Kids Are All Right, Gloria Bell, Boogie Nights, Vanya on 42nd Street and others.

After meeting for the first time on The Myth of Fingerprints set, the director and actress established a good bonding that did not take long to change into a romantic relationship.

In the 1997 drama film Julianne played the leading character of Mia, whereas Bart was the director, writer, and producer. Moore and Ferundlich’s other joint projects include World Traveler (2001) and With/In Volume 1 (2021).

After sharing a year of an intimate relationship, The Lost World: Jurassic Park actress Julianne and The Rebound director Bart welcomed their first child. Their son Caleb “Cal” Freundlich on December 4, 1997. After four years, their second kid, a daughter, Liv Freundlich, was born on April 11, 2002.

In May 2022, Julianne and Bart’s son Caleb graduated with a Master of Music, Screen Scoring Program from New York University (NYU) Steinhardt. He also received a Bachelor’s Degree in Music and Media from Davidson College.

On the other side, it seems like Bart and Julianne’s daughter Liv will follow in her mother’s footsteps. The 20 aged  Liv Helen has already made her appearance in his father’s films Trust the Man (2005) and The Reound (2009). The 5-feet-9-inch (175 cm) tall Liv has also appeared in high-profile events with her parents.

Their Marital Life Since 2003

After giving birth to daughter Liv Helen, Bart and Julianne tied the wedding knot on August 23, 2003, in an intimate ceremony held in New York. The mother of two did not choose to wear a white dress to walk down the wedding aisle with her partner of more than six years.

The bride Julianne chooses to wear a V-neck light purple dress from Prada. The groom, Bart, wore a matching soft purple tie with a striped shirt and white tuxedo. Since the big day, Mr. and Mrs. Freundlich have celebrated a decade-long marriage and are sharing a healthy marital relationship.

On August 24, 2021, actress Moore shared a picture from their wedding to wish husband Bart on their anniversary. She wrote, “Happy Anniversary, my love. 18 years married, but we don’t really wear purple anymore. Maybe we should bring it back. I love you so much.”

Before sharing an intimate marital bond with Bart, actress Moore suffered a failed marital life. Julianne was married to John Gould Rubin. The 71 aged John Gould is also a filmmaker by profession who works as an artistic director at The Private Theatre Corporation.

Julianne and John tied the wedding knot in 1986 after meeting for the first time in 1984. However, their marriage did not last long. The former married duo partitioned their relationship in 1993, finalizing the divorce in August 1995. Moore said in an interview with The Hollywood Reporter regarding the split, “I was lonely. I don’t think I felt happy,’ she said. ‘I didn’t have the kind of personal life I wanted.”

The American filmmaker Bart is earning a reasonable sum of wealth from his professional career. As per Celebrity Net Worth, Freundlich has an estimated net worth of $5 million. He has directed, produced, and worked as a writer in several successful films and series. From this, we can assume that Bart is accumulating impressive worth. Per Payscale, a film director’s average salary is $72116.

Likewise, Bart’s wife Julianne has a net worth of $55 million. Moore collected this wealth from her four-decade-long acting career. The actress has also appeared in several movies that have earned well at the box offices. The science fiction film The Lost World: Jurassic Park collected $618.6 million under a budget of just $73 million.

Similarly, the psychological crime thriller film Hannibal made $351.6 million with a budget of $87 million, where actress Julianne portrayed the role of FBI Agent Clarice Starling.

Keep in touch with Favebites to know about your favorite filmmaker and actress.