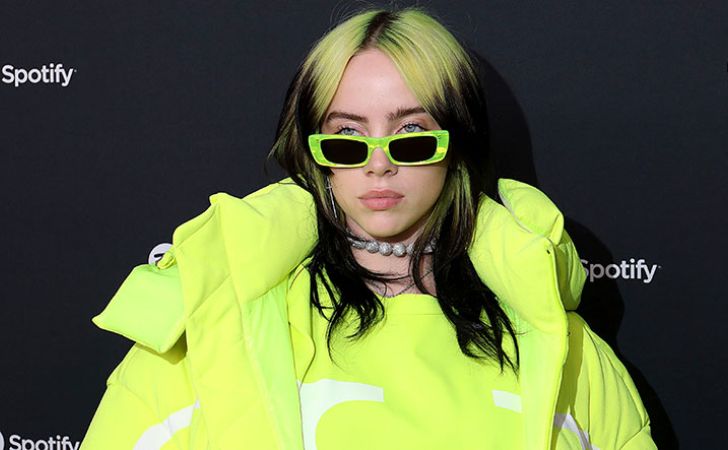 Billie Eilish is an American singer and songwriter. She is very popular with her successful debut single, Ocean Eyes. Billie was born on December 18, 2001.

She was born and raised in Los Angeles, California, United States of America. She has many popular songs like Ocean Eyes, Lovely, Bad Guy, Bellyache, Happier Than Ever, I Love You, Hostage and many more.

Let’s know more facts like her Early Life, Career, Net Worth and Relationship.

The Early Life of American singer and songwriter Billie Eilish

She was born in a family of musicians and actors. Her father’s name is Patrick O’Connell, and her mother is Maggie Baird. Both of Billie’s parents are popular e Americaentertainment industry personalities.

Billie grew up listening to The Beatles and Avril Lavigne, and she and her brother Finneas O’Connell were homeschooled for most of her early years.

Their mother wrote the lyrics to songs, and their father played instruments like Piano and Ukulele. The musical vibe in her household inspired her to pursue her career in the Musical Industry.

Billie’s older brother had a band of his own, and Finneas wrote the song Ocean Eyes. However, Finneas wanted her sister Billie Eilish to record with her amazing voice. This song was her breakthrough success for Billie Eilish, which boosted her career.

Billie Eilish released the song Ocean Eyes on November 18, 2015. The song turned out to be the mega-hit of the year, and they decided the music should be released on the song streaming platforms, so they decided to release the song on Soundcloud.

Billie even released the dance video on that song where she was dancing in the video. After a couple of weeks of releasing the music on Soundcloud, it received a hundred thousand listens.

In January 2016, Billie’s brother Finneas and his manager arranged the deal with Apple Music and signed Billie Eilish to the A&R company. After the massive success of her debut song Ocean, Eyes Billie then released the song Bellyache on February 24, 2017.

In 2018, Billie went on headlining concert tour; the Where’s My Mind Tour. She released the song Party Favoron 7-inch vinyl along with the cover of the song Hotline Bling a song written by the Canadian Rapper Drake as the B-side track for the vinyl.

Eilish even collaborated with the American mmegastarKhalid for her single Lovely, which was released on April 19, 2018. The song became one of Billie Eilish’s second most streamed songs on Spotify, with 1.7 billion streams on the Spotify platform.

In the year 2019, released an album named When We All Fall Asleep, Where Do We Go? on March 2019. The album debuted on the Billboard 200 and the UK album chart, which made Billie the youngest artist born in the 2000s to have a number one album in the United Kingdom.

The fifth single of the album Bad Guy was released on March 29, 2019. The song instantly became the most successful and popular song of the year.

Bad Guy peaked at number one in the United States in August. The song became Billie’s most streamed song on Spotify, with 2 billion streams. She became the youngest artist born in the 2000s to have their song peak at number one since Lorde with her song Royals.

Awards and her Grammys

Eilish began her tour at Coachella Music Festival. However, on November 20, 2019. She got nominations for six Grammy Awards.

The Net Worth of the MMegastarBillie Eilish

Billie Eilish has an estimated $30 million net worth. Billie’s primary source of her income is her musical career, Album sales, Streaming platforms like Spotify and Soundcloud and Brand Advertisements.

Billie wears expensive custom-made outfits from Luxury brands like Louis Vuitton, Gucci, Chanel, etc. Her costumes for Interviews, Stage performances, and Awards show go for a price range of $4000- $10,000, and Billie is obsessed with accessories like necklaces and rings, which also cost her thousands of dollars.

Billie Eilish owns a Dodge Challenger SRT Hellcat car which costs her $60,000, and she got the custom matte finish which all cost her almost $80,000 for her car alone.

Billie Eilish is a very beautiful lady. She stands at 5 feet 3 inches which equals 1.62m. She weighs about 61 kg which equals 134 kg. Billie Eilish has natural Blonde hair, but now she dyes her hair very often. She has a very rare grey eye color.

Billie was born on December 18, 2001. She is a Sagittarius as her zodiac sign. Billie was born and raised in Los Angeles, California, United States of America. However, Billie is 20 years old as of 2022.

For more celebrity content, please do visit our page, Favebites. If you have any queries about this particular article, please leave them in the comment section below.