Bria Murphy is an American actress and artist who co-founded the Artus Gallery. The 33 aged Bria tied the wedding knot with her fiance-turned-husband Michael Xavier on July 9, 2022. Bria is the daughter of comedian and actor Eddie Murphy and his ex-wife Nicole Mitchell. 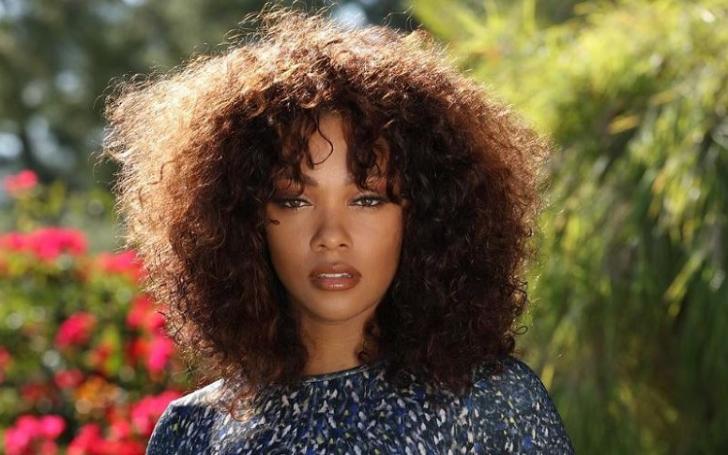 Bria Murphy is an actress by profession who is famous for her outstanding performance in several movies and TV shows. Among many others, Bria is known for her role in films like Amateur Night (2016) and The Perfect Match (2016). Besides all the professional work, Bria is also grabbing full media attention as the daughter of the famous Eddie Murphy (father) and his ex-wife, Nicole Mitchell (mother).

The bold and beautiful Bria was born as Bria Liana Murphy on November 18, 1989, in Sacramento, California, the United States of America, under the zodiac sign Scorpio. Besides being an experienced actress, Bria is also an enthusiastic artist. She is the co-founder of ‘Artus Gallery.’

If you know Murphy’s professional details, here are some facts you need to know regarding Bria’s marital status. In the following sections, get the details of her recently completed wedding ceremony with her longtime partner.

The 33-year-old painter Bria is happily wedded to her beloved fiance-turned-husband Michael Xavier. Michael, aka Mike, is an award-winning actor from Ontario, Canada. Xavier’s IMDb profile suggests he has worked on movies and TV shows like Shazam! Rookie Blue, A Swinger’s Weekend, etc.

Bria walked down the wedding aisle with her Canadian partner Michael in a romantic ceremony on July 9, 2022. Over 200 guests attended their wedding event held in Beverly Hills, California, including her divorced parents, Nicole Mitchell and Eddie Murphy.

But, the couple, who had been romantically involved for a long time, officially declared their romantic union in late 2021 via their Instagram account. They also surprised their fans by announcing their engagement.

Actor Xavier proposed to Bria with a diamond ring in December 2021. Sharing some of their engagement pictures, Bria captioned, “My heart, my best friend, my forever. I love you, always.” On the other side, Michael wrote, “Forever my love.”

Nicole’s eldest daughter Bria Murphy previously dated the R&B singer Marcus Cooper widely popular as Pleasure P. There was a rumor regarding their relationship until Pleasure P talked up his relationship with Bria after their separation.

In one of the interviews with XoNecole back in 2013, Marcus claimed that they had been dating for two years. After the breakup, he said, “Of course I cried! I’m not gonna play like you know a lot of guys so swagged out they scared to say they sorry, I ain’t got nothing to hide. It hurt me.”

Besides, Pleasure Bria was rumored to date a former NBA star, Brandon Byron Jennings. How and when the rumor swirl in the media is still unclear. But it seems like Brandon and Bria were not a romantic pair because they have not spoken anything about their relationship with the media.

The 5-foot-9-inch (175 cm) tall Bria’s parents Eddie Murphy and Nicole Mitchell, were one of the beloved Hollywood couples. Nicole and Mitchell met in 1998 at an NAACP Image Awards Show.

After their first encounter, they began dating one another and later walked down the aisle on March 18, 1993, at the Grand Ballroom of The Plaza Hotel in New York City, in front of the bride and groom’s dearest ones.

The Murphy family of seven was living happily. However, after 13 years, Eddie and Nicole decided to partition. And they officially divorced on April 17, 2006. After the separation, Bria’s mother, Nicole, shared her engagement ring with Wanda Hutchins‘ ex-husband Michael Strahan. But they also called off their engagement in 2014.

The American actress, artist, and celebrity daughter Bria enjoy a net worth of $5 million. She has calculated this wealth throughout her professional career. Bria is an actress and professional model, from where she doubtlessly collects impressive wealth.

Bria has worked in numerous box office hit movies. The 2003 American family comedy film Daddy Day Care collected $164.4 million in its box office collection. The film was directed by Steve Carr and produced by John Davis and Wyck Godfrey under a production budget of $60 million. Bria worked in the Art Department of the movie.

Actress Bria has also portrayed the character in the film alongside her father, Eddie. Similarly, Bria’s dad, Eddie Murphy, has a net worth of $200 Million in total, which he has collected throughout her professional work as an actor, comedian, producer, and director.