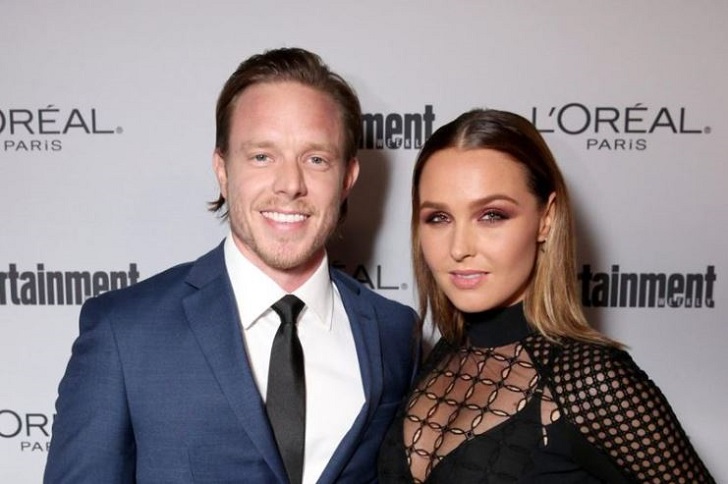 If you watch ABC’s medical drama series Grey’s Anatomy, then Camilla Luddington might not be a new name. The British actress Camilla plays Josephine “Jo” Wilson in the series. The actress is a receiving media attraction and fans through her excellent acting skills.

The 5-feet-5-inch (165 cm) tall actress Camilla lives a lavish life earning an impressive sum of wealth from her decade-long acting career. Ludington has an estimated net worth of $2 million, which she accumulated from her appearance in successful movies and TV series.

Who Is Camilla Luddington’s Husband?

The 38-years-old Camilla’s husband, Matthew “Matt” Alan, born Matthew Gerbig, is also a member of the film industry. He is the son of Karen Gerbig and Larry Gerbig. The Evansville, Indiana native Matt is a graduate of Reitz High School. Similarly, he attended Western Kentucky University.

The actor Matthew is known for appearing in the teen drama series 13 Reasons Why as Seth Massey. Alan’s other movies and TV shows credits include Ghost Whisperer, Hidden in the Woods, Castle Rock, Snowfall, and others. Similarly, Matthew has worked in one episode of Grey’s Anatomy with his wife, Camilla.

First Met And Journey To Become Parents For The First Time

The Grey’s Anatomy actress Camilla and the 13 Reasons Why actor Matt first met while working together at Los Angeles Restaurant. Alan and Luddington began their romantic affair in 2008.

Later, she gave birth to her and Matthew’s first baby daughter Hayden Alan on March 9, 2017. Sharing a sweet video with newly-born Hayden on Instagram, Camilla wrote, “We have a new great love in our lives… our sweet baby girl. Hayden.“

After more than eight months of giving birth to a baby girl, the Tomb Raider actress Camilla got a surprise proposal from her longtime boyfriend. Matthew got down to one knee and proposed a diamond engagement ring to Camilla on December 31, 2017.

Revealing the engagement news via Instagram post, Camilla wrote, “So this happened on New Year’s’ Eve. I’m’ not sure I even let Matt get through his proposal before I started yelling YES YES YES!! Of course, it was a yes! Also Hayden approves.”

Camilla and Alan finally decided to take their relationship to the next level by marrying after decade-long dating. On August 17, 2019, they tied the wedding knot at the Ritz-Carlton Bacara Hotel in Santa Barbara, California.

The bride and groom’s dearest ones attended the beachside wedding ceremony. Their two-year-old Hayden was also part of the wedding. Camilla wore a strapless flower embroidered gown that features a long veil designed by Mira Zwillinger. Similarly, Matthew dashes the wedding look by wearing a grey tuxedo.

Likewise, their wedding was featured in People Magazine. As of now, Mr. and Mrs. Alan are sharing a healthy bond as a perfect married pair. The husband-wife duo has already celebrated their 2nd wedding anniversary and still going strong.

The Birth Of Second Kid

On March 10, 2020, Justice League Dark actress Camilla announced the news of her second pregnancy. Later, she and her husband Matthew welcomed their son Lucas Matthew Alan in August 2020. She revealed the news of Lucas’ birth via Instagram post.

As of now, Camilla and Matthew are jointly parenting their daughter Hayden and son Lucas. The Alan siblings are living merrily with their celebrity parents. Hayden and her brother Lucas are kept far from the limelight, unlike other star kids.