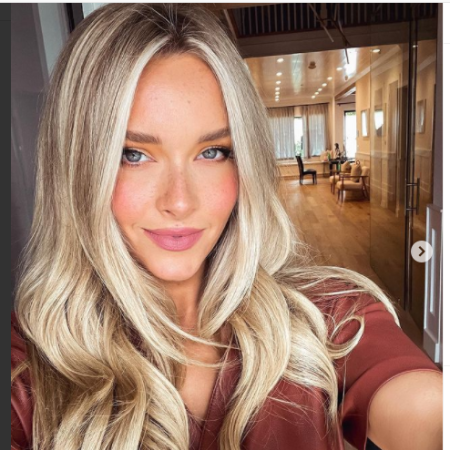 Camille Veronica Kostek is a prominent American model, actress, and host who rose to fame after working for Reebok as a model. Later, she gained further recognition after appearing in the Sports Illustrated Swimsuit Issue which includes a cover of the 2019 edition. Moreover, she is also an on-field host of TBS’s upcoming reboot of Wipeout.

Who Is The Relationship Status Of Camille Kostek?

Many of her fans and followers are very curious to know about her love life. So, here is the answer for it. Sadly, Camille is not a single woman for now as she is in a happy relationship with her boyfriend, Rob Gronkowski. Well, Rob is a famous American football tight end for the Tampa Bay Buccaneers of the National Football League (NFL).

The two of them started dating in 2015. As a matter of fact, the duo first met at a Patriots charity event on Thanksgiving day in 2013. At that time, Camille was a cheerleader for New England Patriots whereas Rob was playing as a tight end for the team.

It has been 5 years of their successful relationship and the duplet is still going strong and so in love with each other. Despite being a famous and hot couple, they are successfully keeping themselves away from unwanted rumors and controversies regarding their private life.

In the world of the internet and dating apps, Rob and Camille Kostek met in person and started dating. Well, Rob shared his phone number with Camille in a crazy way. In an interview with Fox News, Camille elaborates the story. She said,

“He ripped off his ‘Hi, my name is Rob Gronkowski’ sticker on his shirt,” Kostek prefaced of the then-New England Patriots tight end. “So he had written on the back of it his phone number and then he wrote ‘Shhh,’ because he knew it was, it was a secret.”

Former tight end player, Jermaine Wiggins delivered the note to her and also tell her about Rob’s first concerns. After several days, she called Rob and as of 2021, both of them are happily living together. In fact, they live in Foxborough, Massachusetts, and also in Tampa, Florida.

Net Worth Of Camille Kostek

As a model, Camille has earned a hefty amount of money through her successful career. Not to mention, Camille Kostek’s net worth is around $3.4 Million as of 2021. To date, she has worked with some of the renowed companies such as Ciao Belle Benrus, Equinox Fitness, and Dune Jewelry.

The famous model has also graced the covers of luxury lifestyle magazines such as Ocean Drive, BELLA, Haute Living, and Bay. Without a doubt, she must have received a hefty salary from these magazines. Furthermore, she advertised brands such as Nissan, New Balance, and Rebag.

Not only advertisements and modeling but Kostek also have ambassadorships for various clothing and cosmetic brands which includes L’Oreal, Victoria’s Secret, and Clarins. Apart from her earnings, the tight end NFL player, Rob Gronkowski’s net worth is around $45 Million for now.