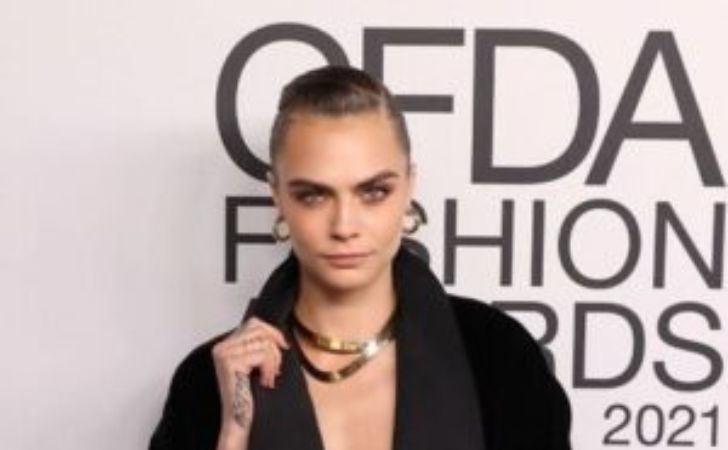 The adorable blonde beauty Cara Delevingne lives a successful professional life as a model, actress, and singer. Delevingne is famous for portraying the leading role of June Moon/Enchantress in the superhero film Suicide Squad. Also, Cara is managed by the top international modeling agency IMG Models.

The English fashion influencer and entertainer Cara is openly pansexual. Delevingne makes headlines for her romantic and rumored relationship with several top personalities. In the following sections, let’s find Cara’s present and past romantic affairs.

Whom Is Cara Delevingne Dating As Of 2022?

The 29-years-old actress Cara is quite secretive regarding her current relationship status. But, her romance rumors are swirling all over the media. Delevingne is speculating to be romantically linked with the Queen’s Gambit actress Anya Taylor-Joy.

People are aware of Cara and Anya’s friendship, but their close bonding has also made their fans assume them more than friends. The rumors regarding Taylor and Delevingne’s possible relationship arose after they shared pictures on Instagram of their appearance at the Dior Cruise Fashion Show in June 2022.

Later, in November 2021, Cara also shared a picture with Anya. In the lengthy Instagram captioning, she congratulates Anya for winning the Face of The Year Award at the 2021 CFDA Award functions.

Neither Cara nor Anya have spoken about their relationship status. However, it seems like the actresses have nothing but solid friendships.

For the information, in late 2021, Cara also made news of having matching tattoos with songstress Selena Gomez. Deleveingne and Gomez inked pink watercolor rose from the tattoo artist Bang Bang. The tattooist broke the news of their matching tattoo via his Instagram post.

Selena said, “Cara is one of my best friends regarding the tattoo. I was maybe 16 when I met her. She calls me ‘Rosebud.’ So, it’s a nickname. I’ve always wanted a rose, and now I have one and love it.”

The model Cara was in a romantic relationship with Jake Bugg, an English songwriter and singer. Delevingne and Bugg first met through their mutual friend Rita Ora.

At the time, both of them were in their early career. Everything was going fine, but in April 2013, they split their relationship because of their busy work schedules.

After briefly dating Jake in late 2013, Cara’s name coupled with prominent singer Harry Styles. They used to meet casually and were photographed hanging together, from which the rumors regarding their affair sparked. However, addressing all the fake news, Harry declared, “She’s not my girl,” in an interview with MTV.

As mentioned above, the model Cara is openly pansexual. Her first same-sex relationship was with an actress Michelle Rodriguez. In February 2014, Delevingne and Rodriguez made their relationship public after meeting for the first time through mutual friends.

Regarding the relationship, Michelle said, “It’s going well. When we started hanging out, I thought she was awesome, and we had the best time together.” However, Cara and Michelle were not meant to be together. In May 2014, they ended their relationship.

Cara hung up with other female celebrities during the relationship, making Michelle sad and ending their relationship.

The Chanel model Cara and the American musician Annie Clark, aka St. Vincent, confirmed their relationship in June 2015. In an interview with British VOGUE, Cara opened up about her love affair with St. Vincent, saying, “I’m completely in love.”

After dating for more than a year, the rumors regarding their separation began swirling all over the media.

Neither Cara nor Annie publicly announced their break-up, but the report claims the duo partitioned the relationship in September 2016. The Sun reports that their hectic schedule is the primary reason for their separation.

The Paper Towns actress Cara is famous for her long-lasting relationship with Ashely Benson. The 32 aged Ashley is also an actress known for her role in Pretty Litle Liars. Delevingne and Benson’s romance rumors arose in August 2018 after they were seen kissing each other at London’s Heathrow Airport.

Later, in June 2019, Cara confirmed her relationship with Ashley via Instagram post. They attended several public events and shows together. They also used to share pictures on their social sites. However, there was on-and-off going on between the pair. But, in April 2020, Cara and Ashley finally parted ways.