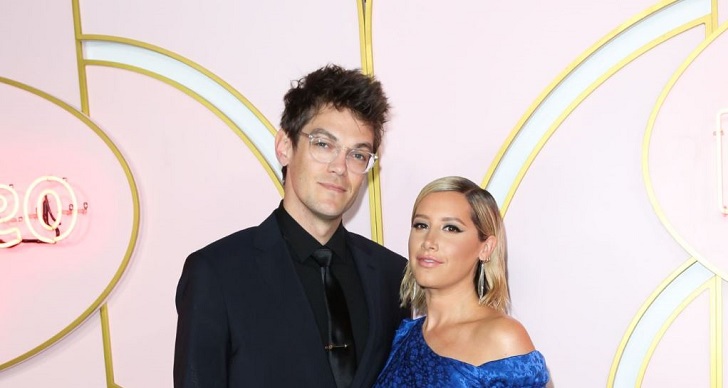 Christopher French is an American music composer who has been in the music industry since his teenage. French attended Musician’s Institute for Recording. Later, he received a Master’s degree from Berklee College Of Music for Film Scoring & Orchestration.

Christopher was a member of the alternative rock band Annie Automatic. As a music composer, he has worked in movies and TV shows such as Helluva Boss, On the Tour With Asperger’s Are Us, The Dead Girls Detective Agency, and Young & Hungry.

Christopher, a 6-feet-1-inch (185 cm) tall singer, has earned wide media attraction and an impressive sum of wealth from his music career. Besides making popularity from professional work, Christopher is also gaining fame as a celebrity husband. In the following sections, let’s find detailed information regarding Christopher and his wife, Ashley Tisdale.

The 40-years-old Christopher’s prominence rises to fame after sharing his intimate life with Ashley Tisdale. The 36 aged Ashley is a well-established entertainment personality.

Watch the official music video of the song ‘He Said She Said’ by Ashley Tisdale.

Concerning the Teen Choice Award-winning Ashley’s music credits, she has released three studio albums, Headstrong, Guilty Pleasure, and Symptoms. It includes songs such as He Said She Said, Voices in My Head, It’s Alright, It’s Ok, and others.

The Whisper of the Heart cast Ashley and Call Me Crazy singer Christopher first met through a mutual friend in 2012, and it was love at first sight for both of them. In an interview, Ashley said,

“I think from the moment that him and I met, I just knew it. I was like, ‘Ok this is the guy,’ and he knew the same thing. It doesn’t get any better. I just can’t explain it.”

After the first meeting, Tisdale and French did not delay starting their romantic relationship. Following eight months long dating, they got engaged in August 2013. French popped the question on Empire State Building in Midtown Manhattan, NYC.

Later, the couple took their relationship to the next level by marrying on September 8, 2014. Their intimate wedding ceremony was held in Santa Barbara, California, and their close and dearest ones attended the reception. Sharing wedding news on Instagram, Christopher wrote, “Best day ever. Introducing, Mr & Mrs. French – 9.8.14.”

The bride Ashley wore a beautiful sleeveless gown paired with a flower tiara for the big day. On the other side, the groom, Christopher, walked down the wedding aisle wearing black suit pants, a white shirt, and a black tie.

As of now, Christopher and his wife Ashley are sharing a healthy bond as perfect married partners. Mr. and Mrs. French have already celebrated their 7th wedding anniversary, and the glue is still strong. Likewise, this matched pair spends quality time together and never misses a chance to share adorable pictures on their official social networking sites.

Ashley and her husband Christopher have shared an adorable baby girl from the strong marital union. On September 17, 2020, Ashley and Christopher shared the news that they were expecting their first kid.

On March 23, 2021, the singer and songstress welcomed their daughter Jupiter Iris French. Ashley took Instagram to share the news of Jupiter’s birth. As of now, the year-old Jupiter is living a limelight and lavish life with her celebrity parents.

The Sleep Walking singer Christopher and Sharpy’s Fabulous Adventure actress Ashley are jointly parenting their daughter, Jupiter Iris. Similarly, she also features on the post updated by her parents on their Instagram accounts. As of July 2022, Jupiter is all over her parent’s social media handles. Both of them, Julia and Christopher, are madly in love with thier newborn. They seem to be obsessed with her and are raising them well. Fans seem to love all the updates, and the sneak peeks these love birds provide us with through their social media posts.