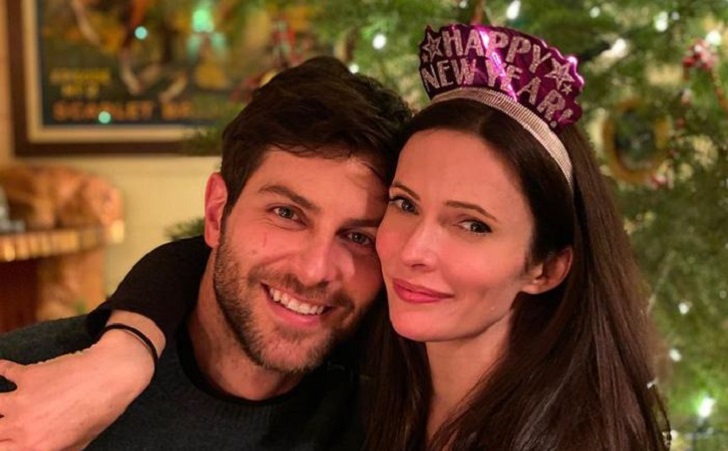 David Giuntoli currently stars in the family drama series A Million Little Things, grabbing wide media attention. The actor Giuntoli, appearing in Hollywood movies and TV series since 2003, has successfully established himself in the industry. Everyone adores his appearances in different genres of films and TV shows.

The Milwaukee, Wisconsin native was born to Mary Giuntoli and David Giuntoli on June 18, 1980. David is an alumnus of St. Louis University High School. He also earned a Bachelor’s degree in International Business ad Finance from Indiana University Bloomington. Later, to pursue his career in acting, David entered the Echo Theater Company.

The actor currently focuses on his acting career. His wedding life is also blooming as he is in the happiest marital relationship with his wife, Elizabeth Tulloch, aka Bitsie. Read the details of Mr. and Mrs. Giuntoli’s wedding live in the following sections.

Like the American actor, Chad Michael Murray and his wife Sarah Roemer, David and his now-wife Bitsie met while filming for their first joint project. Giuntoli and Tulloch worked together in the art and drama film Caroline and Jackie as Ryan and Jackie, respectively.

Elizabeth, also the co-producer of the film, started her romance with David shortly after the filming finished. But they dated privately without publicizing it. Again the duo made their joint appearances in the police procedural drama series Grimm (2011-2017).

In the NBC series, David and Bitsie portray the leading characters of Detective Burkhardt and Juliette Silverton. This time they also publicly announced their romantic relationship. In 2014 making confirmation, Bitsie said, “It’s pretty public now that I’m dating David, so that’s kind of out of the bag. We were hiding it for a long time, but now everybody knows.“

Following several years of dating, the Batman: Soul of the Dragon actor David proposed to Batwoman actress Bitsie with a diamond engagement ring in April 2016. On October 3, 2016, Elizabeth announced her engagement via Instagram, saying, “Such a fun engagement party last night!“

Their Conjugal Life Since 2017

The Real World/Road Rules Challenge (2003) winner David shared his marital vows with his longtime partner Elizabeth “Bitsie” Tulloch in June 2017. The couple tied the wedding knot in Montana in a small ceremony surrounded by their close people.

For the big day, Bitsie wore a full-sleeve knee-length dress making her hair a low bun and paired it with white high heels. And David wore black suit pants, a black waistcoat with a white shirt and a tie. Additionally, their beautiful wedding images were handled by Timeless Photo Co.

The actor revealed their wedding news via Instagram, writing, “I married her. I air-guitared her. I terrified her. I love you @bitsietulloch. It’s gonna be a wild ride.” Likewise, Bitsie shared wedding snaps on July 7, 2017, captioning, “#TBT to our tiny, beautiful wedding in Montana last month.”

David Giuntoli, Father Of A Daughter

The 5-feet-11-inch (180 cm) tall actor David is parenting a baby girl with his beloved wife, Elizabeth. On December 11, 2018, actress Bitisie shared images from the baby shower, writing, “It’s hard to post photos of our baby shower without revealing the gender so… we may as well share with you… it’s a girl!“

Mr. and Mrs. Giuntoli, who have celebrated their fifth wedding anniversary, jointly raise their only child. However, the three-year-old Vivian is kept away from the limelight. David and his spouse Elizabeth have not revealed the baby’s face yet.