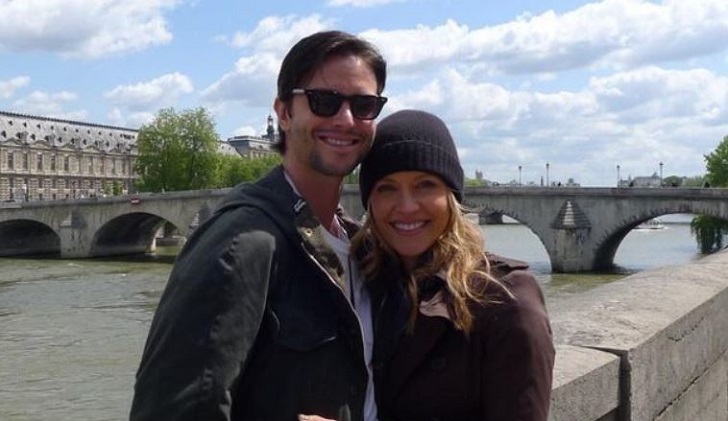 After eight-year of taking a gap from showbiz, American actor Jason Behr re-entered the industry in 2020. He made his comeback playing the recurring role of Tripp in The CW science fiction drama series Rosewell, New Mexico. Back in the early 2000s, Behr played the leading role of Max Evans in Roswell, which was very helpful for him to gain stardom, and he also received the Teen Choice Awards nominations.

The actor was born in Minneapolis, Minnesota, on December 30, 1973. Jason’s parents, David Behr and Patricia Ann Steiner divorced when he was in his childhood. The actor has three brothers, Aaron Behr, Andrew Behr, and Johnny Behr, and a sister named Alisa Behr.

Jason is famous for his appearance as Zor-EI in The CW superhero Television series Supergirl. Also, the actor featured in the 2001 drama film The Shipping News alongside actress Julianne Moore. Behr won the Youg Hollywood Awards for the film actor in the Standout Performance By A Young Actor category. The actor has married his wife, KaDee Strickland, for over a decade. Know the details of their marriage union in the following paragraphs.

Like some Hollywood pairs love stories, Katherine and Jason’s romance started after meeting for the first time on the set of the supernatural horror film The Grudge, the remake of the Japanese horror film Ju-On: The Grudge. In the movie, Behr and Strickland played the characters, Doug McCarthy and Susan Williams, respectively.

Their Romantic Wedding Held In California

The Skinwalkers actor Jason and the Private Practice actress KaDee exchanged their wedding vows in an intimate ceremony after more than a year-long dating. Jason and KaDee tied the wedding knot on November 10, 2006, at Ojai Valley Inn, Ojai, California.

Since the wedding day, Jason and his wife KaDee are sharing a healthy marital relationship. Mr. and Mrs. Behr are celebrating their 16th wedding anniversary in November 2022. On their 15th anniversary, Jason posted a wedding picture, saying, “This the first day of my life…11/10/2006.”

Jason Behr, Father To His Son

From the marital solidarity, the Breakout Kings actor Jason and the Shut Eye actress KaDee welcomed an adorable baby boy.

Their son Atticus Behr was born on October 17, 2013. Their eighth year’s old son Atticus currently lives a blissful life with his celebrity mother, KaDee, and father, Jason. He is also gaining fame as a celebrity son. Atticus travels to different places with his parents and also features on their Instagram posts.