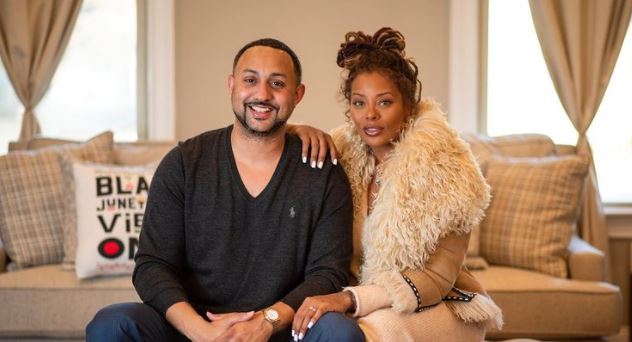 Eva Marcille is an American fashion model, actress, and Television personality. Marcille is the winner of the third season of America’s Next Top Model. Following her successful modeling career, Eva is also involved in acting.

She has featured in movies and TV shows such as Super Capers, The Young and the Restless, The Real Housewives of Atlanta etc.

Besides, the 5-feet-7-inch (170 cm) tall Eva also runs a jewelry ‘Eva By Eva Marcille.’ Eva is gathering an impressive sum of wealth from her prosperous professional works. Now, let’s talk about her personal life. Is she living a blissful marital life with her husband? Find out their marital details in the following sections.

In the RHOA leading cast, Eva first met her now-husband, Michael Sterling. Marcille was there to watch the show, and Sterling was a fundraiser for the Mayor of Atlanta.

Soon after the first encounter, Eva and Michael began sharing a good bond. Later, an alliance turned into a romantic union. Following more than a year-long dating, lawyer Michael proposed to his girlfriend Eva in December 2017 with a round-cut diamond engagement ring.

All the Queen’s Men cast Eva revealed the news of her engagement with her longtime beau via an Instagram post. Showing the engagement ring, she captioned, “I said yes.”

Eva and Michael decided to take their relationship to the next level on October 7, 2018. The couple got married in a lavish ceremony at the Southern Exchange Ballrooms in Atlanta. Eva and Michael’s close ones, including RHOA, cast Cynthia Bailey, NeNe Leakes, and others make their appearances.

The celebrity wedding and event planner Eliana Baucicault and her team managed the wedding event. Similarly, the flower and decor were handled by Akeem Clayton Designs.

Moreover, bride Eva’s hair and make-up were managed by Latasha Wright and Terrell Mullin and the teams. Furthermore, the photographer was Charlton Inije. Eva’s daughter Marley Rae was the flower girl.

Eva wore a sparkling floor-length off-shoulder gown from Daughters of Nonelym Atelier for walking down the aisle.

Telling about the dress to Daily Mail, Marcille said, “ I wanted to feel like a bride and I wanted a wedding dress, and now I feel like a princess.” Eva paired up with white Gucci sneakers. Similarly, she chooses an embellished strapless gown by Galia Lahav for her reception look.

Eva announced her pregnancy with Michael a few weeks before revealing her engagement in 2017. Later, she gave birth to the couple’s first child, a son, Michael Sterling Jr, in April 2018.

Similarly, in May 2019, Marcille revealed her second pregnancy with her husband, Michael. Eva and Michael’s second son Maverick Sterling was born in September 2019.

The husband-wife duo is expecting their third child together. On April 1, 2022, Marcille revealed her third pregnancy with her spouse Michael. Announcing the news via Instagram, she wrote, “We are so excited to welcome our new addition, baby Madison, into the Sterling family coming this fall.”

The unborn baby will be the third kid for Michael, but it will be Eva’s fourth child as she already shared a daughter with her former partner.

The Born Again Virgin cast Eva welcomed daughter Marley Rae with singer Kevin McCall. After parting ways with McCall, Eva got custody of their daughter, and later she changed her surname from McCall to Sterling.

As of now, Eva and Michael are jointly parenting the children. The Sterling siblings are also earning fame as celebrity children. Similarly, they often feature on the post updated by their parents on their official Instagram accounts.