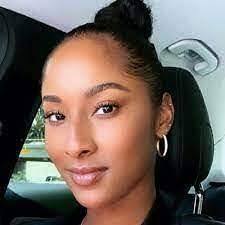 Erica Sherman rose to prominence after sharing her romantic relationship with American national league football player Aaron Donald. Sherman is now living a life with her fiance and his two kids from previous relationships.

Are Erica and Aaron expecting their first child together? Let’s get to know the detailed information of Erica and Aaron’s love life in the following sections.

Erica does not share her life openly in media, and Aaron also had not revealed when the couple started to date before they were engaged. As per the reports, the couple got engaged in 2020.

Erica met Aaron when she worked as a player’s involvement and community affairs manager in 2015 at Los Angeles Rams. Rather than this, there is no information available about their dating history. It seems that the couple started to date after Aaron’s breakup from his former girlfriend.

The couple recently became parents to their newborn child

As mentioned above, Erica and Aaron have become proud parents of their newborn child. Although the details are not shared now, we could see Erica holding her baby during Aaron’s recent match in December 2021, which she uploaded on her Twitter account.

Also, Aaron has posted a vlog about his birthday celebration in May 2021. They celebrated his birthday in their home, in Calabasas, California. There we could see Erica flaunting her baby bump in a white one-shoulder dress while wishing her fiance for his birthday.

Besides, Aaron is already a father of two children. Being daddy for the third time surely has added more joy and happiness to his life. Hence, the couple lives a happy life with their family.

But, who is Erica Sherman? More about Aaron Donald’s Fiance

Erica Sherman is an American citizen born and raised in California, USA. Further, her exact birth month and date are not available. However, Aaron posted a video on his Youtube Channel on July 28, 2020, celebrating Erica’s 29th birthday; we can assume she was born in July 1991.

Currently, Erica is 30 years old. Likewise, her parents’ details remain secret, and so is regarding her sister. But through Aaron’s Youtube video, we learned that her father’s name is Ray Sherman and her sister’s name is Alana Sherman, who virtually wished Erica on her 29th birthday in 2020.

Her sister Alana is a singer who also made it to the Top 24 contestant in American Idol 2021. Additionally, she has a mixed ethnicity of Afro-American. She has black hair and black eyes. Sherman attended Louisiana State University with a major in Public Relations and a minor in Business Administration.

Moreover, she has BA in Mass Communication. Soon after her graduation, she worked as an intern at St.louis Rams for two months. Later, became an intern at Fox Sports from 2007 to 2012.