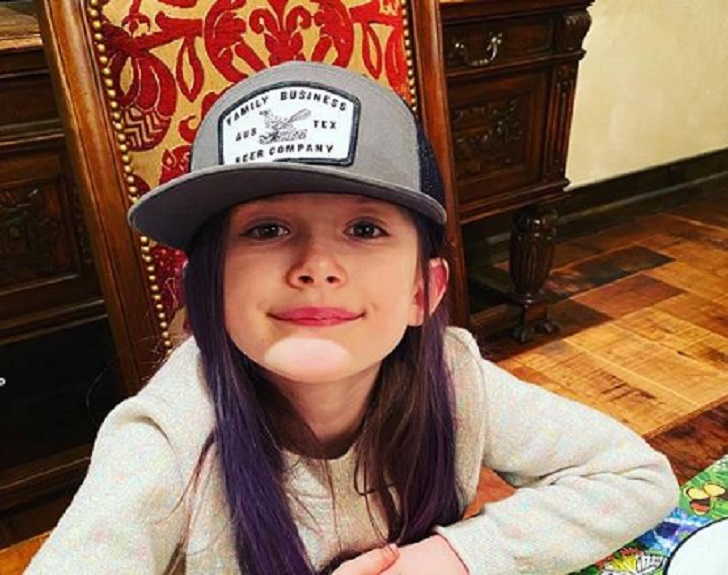 Justice Jay Ackles is an American celebrity kid who has been enjoying her limelight since her birth. Jay Ackles is no other than the elder daughter of popular Hollywood stars Jensen Ackles and Daneel Ackles. Being a star child Jay Ackles has made her appearance in the Hollywood Premiere of Disney + Originals movie Zombies 3.

Justice was born on May 30, 2013, with the zodiac sign of Gemini. She is enjoying her childhood in the spotlight, living with her parents and two younger siblings. Here are some facts regarding Justice; read the articles till the end to learn about it.

Father And Mother, A Successful Actors

The reason behind Justice’s prominence is all because of being a celebrity daughter. The credit for her prominence goes to her highly successful and renowned father, Jensen Ackles, and mother, Danneel Ackles. Justice Jay’s beloved father, Jensen, is making recognition in the showbiz industry as a well-established and successful professional actor.

The 6-feet-1-inch (186 cm) tall Dallas, Texas native Jensen Ross Ackles’s eminence as an actor rises, and his professional career rises to the hype after portraying the leading role of Dean Winchester in Supernatural. For The WB/CW dark fantasy drama series, Jensen is awarded prestigious awards such as the People’s Choice and Teen Choice Awards.

The 44-years-old Jensen’s other famous featured movies and TV shows include the Batman film series, Days of Our Lives, Blonde, Smallville, The Boys, Big Sky, and others.

On the other side, Danneel, born Elta Danneel Graul on March 18, 1979, is also renowned for her recurring role of Anael in Supernatural. Similarly, Danneel’s further credits include One Life to Live, Charmed, One Tree Hill, Friends with Benefits, and others. Danneel and her husband Jensen are also involved in philanthropy works.

Justice Jay, aka JJ, is the elder daughter of Jensen and Danneel. Her parents (Danneel and Jensen) welcomed twins three years after Justice’s birth. She has a twin sister and a brother. Her twin siblings, Arrow Rhodes Ackles and Zeppelin Bram Ackles were born on December 2, 2016.

Justice spends quality time with them. They travel together and often feature on most of the posts updated by Jensen and Danneel on their official verified Instagram accounts. On April 3, 2022, Danneel shared the Ackles family picture on their visit to New Orleans, saying, “I am feeling blessed and grateful to be with my family and friends in this great city where I find endless inspiration and magic on every corner. New Orleans is resilient, diverse and the people are so welcoming you can’t help but feel like you belong.”

The American stars Jensen and Danneel met while filming for the 2007 film Ten Inch Hero. They shared a good bond working as co-stars. Soon, their relationship turned into a romantic affair.

The romance started by sharing on-screen together and remained for three years. Later, Mr. Rhodes actor Jensen proposed to Dawson’s Creek actress Danneel with an engagement ring in November 2009.

After five months of engagement, Jensen and Danneel choose to change their relationship to a marital union. The actor and actress exchanged wedding vows on May 15, 2010. They walked down the wedding aisle in a beautiful ceremony organized at The Rosewood Crescent Hotel, Dallas.

The bride Danneel and groom Jensen’s dearest ones attended the ceremony. Their Supernatural co-star and good friend Jeffrey Morgan and Hilarie Burton were also a part of their wedding reception. For the wedding, Danneel chooses an embellished strapless Monique Lhuillier‘s ruffle white gown. While Jensen wears a black tuxedo, pairing it with a white shirt and a back bow tie.

Justice is too young to start her professional career and earn a decent sum of wealth. The celebrity daughter is enjoying her parent’s net worth and enjoying her childhood.

Justice Jay’s dad Jensen has a net worth of $14 million, which he accumulated from his two-decades-long acting career. Actor Jensen has made his appearance in various successful movies that have earned an impressive box-office collection. As per reports, Jensen received $175 thousand per episode while working in the series Supernatural.

On the other hand, Justice’s mother, Danneel, is also earning a hefty sum of wealth from her professional acting works. Not only that but Danneel also gets paid for her modeling contracts.

For Further Updates On Celebrity Kids, Stay Tuned With Favebites