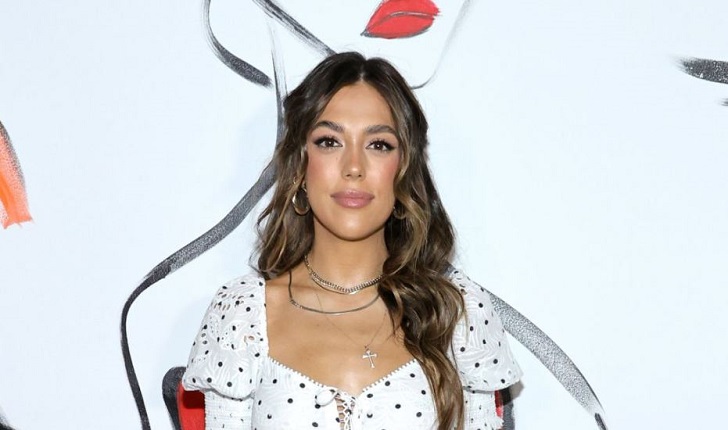 The star kids getting publicity and media attention is not new nowadays. Sistine Stallone is also listed in the category of celebrity kids who are immensely earning popularity. Stallone is non-other than the second daughter of legendary actor Sylvester Stallone and his third wife, Jennifer Flavin.

Besides being a celebrity daughter, Sistine is creating her path and climbing the ladder of success. She follows in her father’s footsteps and is working hard to pursue a better career in the entertainment sector. Sistine has experience working in films 47 Meters Down: Uncaged and Midnight in the Switchgrass.

With a degree in communications from the University of California, Stallone is also a fashion model. Likewise, Sistine also hosts Unwaxed Podcast with her sister. Now, in the following sections, let’s find some interesting facts about Sylvester’s daughter.

Who Is Sistine Stallone’s Boyfriend?

The 23-years-old model Sistine has not openly discussed her present relationship status. Unlike other celebrities, she has kept her love life details far from the media attention.

It seems like the actress’s current relationship status is single. Sistine has not shared any pictures on her official Instagram account that hint at her personal life. Stallone is focused on her career, which might be the reason behind her singleness. Also, she might be searching for the right person to start the chapter of her love life.

The 5-feet-9-inch (175 cm) tall Sistine was rumored to have a romantic connection with English actor Gregg Sulkin back in 2018. The actor Sulkin, 29, has made his appearance in Wizards of Waverly Place, Runaways, Pretty Little Liars, and others.

The rumors regarding Stallone and Sulkin arose after they were spotted holding hands together in Beverly Hills. At the time, Gregg was 25 and Sistine was 19-years-old. However, neither Sistine nor Gregg confirmed their relationship status.

For the information, before linking his name with Sistine, Gregg was in a relationship with Bella Thorne. As of now, the Pretty Little Liars cast Sulkin is dating actress Michelle Randolph, Cassie Randolph‘s sister.

The 47 Meters Down: Uncaged actress Sistine is the middle daughter of Sylvester and Jennifer. She has an elder and younger sister. Her parents first met in 1988 at a restaurant. The Serious Skin Care co-owner Flavin and the Rocky actor Sylvester dated till 1994. Later, they reconciled and married on May 17, 1997, at The Dorchester Hotel.

Jennifer gave birth to her and Sylvester’s first daughter Sophia Rose Stallone on August 27, 1996. Similarly, their second daughter, Sistine, was born on June 27, 1998. Likewise, Sylvester and Jennifer welcomed their third daughter Scarlet Rose Stallone on May 25, 2002.

As mentioned above, Sistine and her elder sister Sophia host a podcast called Unwaxed. Sistine shares a close bond with her two sisters and never misses a chance to share pictures with them on her official Instagram account with 1.6 million followers. For the information, the Stallone sisters have a half-brother named Seargeoh Stallone, born via Sylvester’s former martial bond with Sasha Czack. Likewise, their half-brother Sage Moonblood Stallone, actor, died of heart disease on July 13, 2012.