Skip to content
Home » Entertainment » Gina Gannon Wedding? Who is Gina’s husband? Where Did They Meet? 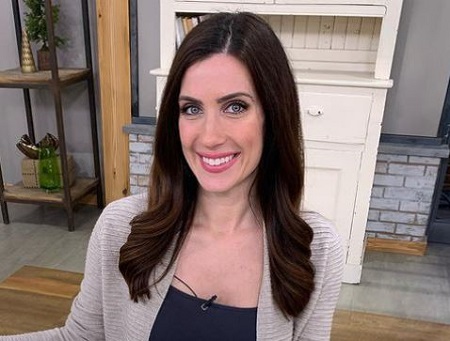 The American media personality Gina Gannon works as a traffic reporter on 6 ABC Action News. Gannon is also a Gourment Food host on the TV network QVC. Similarly; Gina is a Board of Directors (BOD) member of non-profit organizations Mums and Mutts.

Gina is earning a huge media attraction from her professional and successful career as a journalist. Undoubtedly, she is also earning an impressive sum of wealth. But, what about her personal life? Is Gina living a successful and blissful love life? Gina is a married woman. Know about her husband and marital life.

Gina Gannon Is Married To Her Husband, Dave

The 6 ABC interim Traffic reporter Gina is in a blissful marital relationship with her beloved husband, Dave. However, the detailed information regarding her spouse, Dave, is missing. His profession, family details and even his surname are unknown. Similarly, how and when Dave and Gina met is also unclear.

Gina and Dave tied the wedding knot in July 2021, at Cescaphe Ballroom, in Philadelphia, Pennsylvania. The intimate wedding ceremony was held in front of their dearest ones. On the big day, the bride Gina wore a floor-length A-line gown that featured a long veil.

On the other hand, the groom, Dave, walks down the aisle wearing a midnight blue tuxedo with black lapels. Additionally, the photographer of their wedding was Ashlee Mintz.

Since the wedding day, the traffic reporter, food host Gina has been living a private married life with her husband, Dave. Gannon rarely shares pictures with him on her social sites.

Having a keen interest in journalism, Gina joined QVC, a free-to-air TV network and flagship shopping channel, in April 2014. There she presented the haircare brand WEN by Chaz Dean. Gannon worked there till July 2019.

In December 2016, Gina joined 6 ABC in their Action News Team as a traffic reporter. Since August 2017, Gannon also hosts 6 ABC’s lifestyle show, FYI Philly; she hosts the food segment, ‘In the Kitchen with Alessi.‘ Likewise, Gina is also a Gourment Food Host at QVC. She “represents many gourmet food brands.‘