Skip to content
Home » Entertainment » How Many Children Does Actress Katherine Heigl Have?

How Many Children Does Actress Katherine Heigl Have? 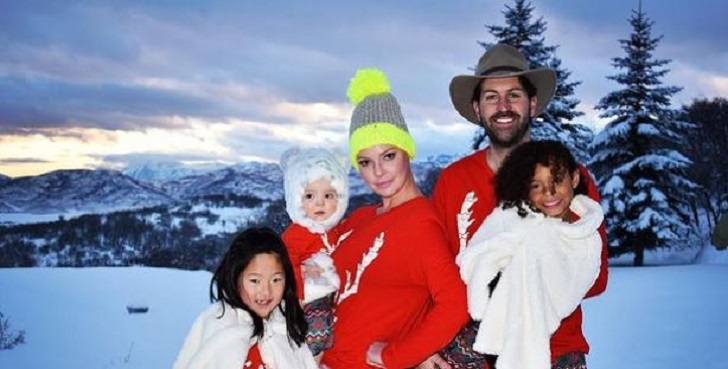 Katherine Heigl has been actively making a presence in Hollywood movies since 1992. Heigl is famous for playing Dr. Izzie Stevens in Grey’s Anatomy. For the role, she also received prestigious awards such as the Screen Actor Guild Awards, Emmy Awards, and People’s Choice Awards.

The 5-feet-9-inch (175 cm) tall actress Katherine’s other credit acting, includes One for the Money, The Ugly Truth, Roswell, Firefly Lane, etc. Similarly, Heigl is also an executive producer. The three-decade of acting career has helped Heigl receive both eminence and a hefty sum of wealth. She owns a $30 million net worth.

Now, let’s find the detailed information about Katherine’s marital and family life in the following sections.

The 43-years-old gorgeous actress Katherine is the mother of her three precious children. She raises the kids with her husband, Josh Kelley. Heigl adopted two daughters and gave birth to a son with her spouse Kelley.

In November 2009, The Tempest actress Katherine and Josh adopted their first daughter Nancy Leigh Mi-Eun Kelley, born on November 23, 2008, from South Korea. Nancy was born with a heart problem, and she went through surgery before leaving Korea.

The Kelley siblings are also gathering fame as celebrity children. They sometimes attend public events with their celebrity parents. Similarly, Nancy and her younger siblings, Adalaide and Joshua, are also featured in the post updated by Katherine and Josh on their official Instagram accounts.

Like Katherine, Josh is also a well-known name in the entertainment industry. Josh, 42, is a singer and songwriter who has released nine studio albums. The album features successful songs such as Amazing, Georgia Clay, To Remember, Almost Honest, Mandolin Rain, etc.

The actress first met the singer while filming the music video for his song ‘Only You‘ in 2005. Following the first encounter, Heigl and Kelley began their friendship. Later, in May 2006, they changed their friendship to a romantic relationship.

After a year-long dating, the couple tied the wedding knot on December 23, 2007. Their intimate wedding ceremony was held in Utah at the Stein Eriksen Lodge. The bride Katherine wore a sleeveless ruffle shoulder pairing it with a birdcage veil. On the other side, the groom, Josh, dashes the look wearing a black tuxedo, a white shirt, and a black-tie.

Since that day, Katherine and Josh have been sharing a healthy bond as perfect married pairs. The husband-wife duo has already celebrated their fourteen wedding anniversary. Mr. and Mrs. Kelley travels and attends public places together. Similarly, they also share romantic pictures on their social sites.