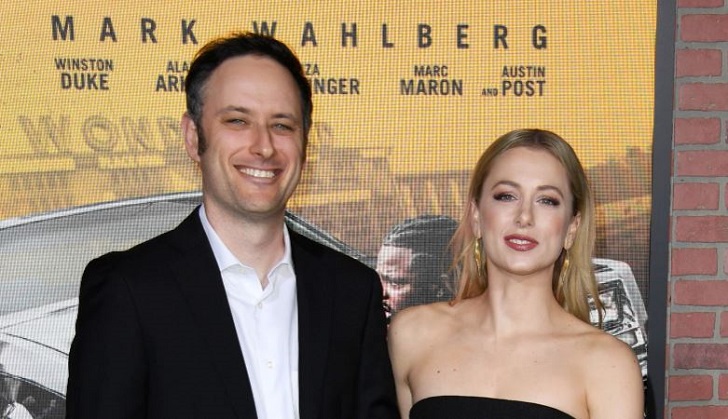 The 5-feet-5-inch (165 cm) tall Iliza created and starred in the Netflix sketch comedy The Iliza Shlesinger Sketch Show. Likewise, she has also starred in a stand comedy film Iliza Shlesinger: War Paint. From her professional career, Shlesinger is earning an impressive sum of wealth. She has an approximate net worth of $7 million. Now let’s find detailed information regarding Iliza’s personal life in the following sections.

Who Is Iliza Shlesinger’s Husband?

The 39 aged comedian, Iliza, has been in a blissful marital relationship with her husband, Noah Galuten. Shlesinger’s spouse Galuten is a professional chef and cookbook author. Noah published a cookbook On Vegetables: Modern Recipes for the Home Kitchen on April 17, 2017. Similarly, the University of California graduate is the host of Don’t Panic Pantry on Youtube.

As per some reports, Iliza and Noah first met through a dating app and at the first encounter, they fell for each other. Shlesinger and Galuten began sharing a good bond and soon began their romantic relationship. Following a few months of dating, Noah got down to one knee and proposed to Iliza with an engagement ring.

Tied The Knot In Los Angeles

The lovebirds exchanged wedding vows in a traditional Jewish wedding ceremony on May 12, 2018. Iliza and Noah tied the wedding knot at South Park City Center in downtown Los Angeles.

The bride, Iliza, wore a beautiful sleeveless gown that featured a long veil designed by Monique Lhuillier. Similarly, her hair and make-up were managed by Mahfud. Likewise, she carried a white flower bouquet, and the beautiful floral design was handled by Butterfly Floral Event Design.

On the other hand, Noah, a groom, dashes the wedding look by wearing a black tuxedo. Furthermore, Iliza and Noah’s wedding details were featured in US Weekly Magazine.

As of now, Mr. and Mrs. Galuten are sharing a healthy bond as perfect married pairs. The husband-wife is soon celebrating their fourth wedding anniversary in May 2022. The married pair attends many exotic places together and never misses a chance to share pictures on their social sites.

Iliza and her husband Noah shared an adorable baby girl from the marital bond. Noah and Iliza welcomed their daughter Sierra Mae Galuten in January 2022. The married pair revealed the news of Sierra’s birth via Instagram post. As of now, they are jointly parenting their only kid. Iliza and Noah prefer to keep their daughter far from the spotlight, unlike other celebrity kids.