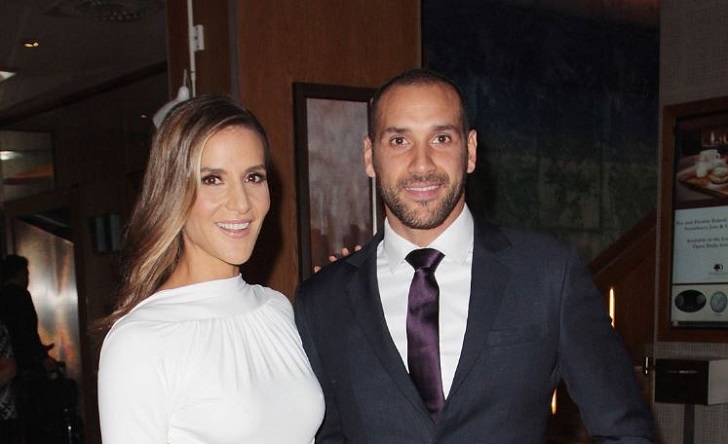 Besides participants, presenters or hosts plays a vital role in making Television shows popular. Amanda Byram, an Irish TV personality, is also gaining prevalent for her hosting style. Byram is adored for her appearance in the BBC One game show Total Wipeout, which she co-hosted with English presenter Richard Hammond.

Irish Film and Television Awards for Best Television Personality nominated presenter Amanda was born in Dublin, Ireland, on June 16, 1973. She is one of the two daughters of Betty Byram (mother) and Denny Byram (father). Her sister’s name is Natasha Byram. As per Amanda’s Linkedin profile, she studied at Mount Sackville Secondary School, Dublin. Similarly, she has a degree in Design and Visual Communication from Dubin Design Institute.

Since 1999 Amanda has been successfully seeking her career as a Television personality. The TV shows she hosted include Grand Slam, Dancing With the Stars Irish, Paradise Hotel, The Swan, and others. Byram also has experience working for the award function and beauty pageants. These were some details regarding Amanda’s professional work. Now, let’s see how is her marital life going. Learn Amanda’s family life in the following sections.

The 5-feet-8-inch (173 cm) tall Amanda is in a loving relationship with her longtime partner-turned-husband Julian Okines. The 42 aged Julian is an executive producer and co-founder of Jam Creative Consultancy based in the United Kingdom. The company “concept, execute and launch multi-channel content for brands, celebrities and bloggers.”

Okines attended Blatchington Mill Secondary School, Hove, England. He is the recipient of a Bachelor of Science (BSc) degree in Psychology from the University of Leicester.

Julian previously served as an online editor for Velour Magazine. Also, he was a digital content producer for the Video Production House. Likewise, Okines is the co-author of The Model’s Handbook, published on January 1, 2012.

Their Romantic Bonding Since 2014

The former The Big Breakfast host Amanda and Julian began dating in 2014 after meeting for the first time during a photoshoot. However, she kept her romantic relationship with Julian private until a year. Amanda and Julian jointly made their red carpet appearance at the IFTA Gala Television Award (2015), where she was also the presenter.

In an interview with Hello Magazine, Amanda said, “We both came into this relationship later in our lives and we have both made mistakes. But we came into this when it was really right. We feel lucky and blessed that we got a chance to meet each other.”

The couple went on vacation to different places in late 2015, which Okines also utilized to propose to his girlfriend, Amanda, surprisingly. On December 31, 2015, Byram shared a picture of herself showcasing her engagement ring on Instagram, writing, “Back on home soil after the adventure of a lifetime. We packed in SO much. Oh and #GotEngaged, HAPPY NEW YEAR EVERYONE.”

The Something For the Weekend co-host Amanda shared her marital life with her partner Julian after several months of engagement. They chose Mandarin Oriental Hyde Park Hotel, London, to walk down the wedding aisle in April 2016.

Julian and Amanda’s dearest ones attended their beautiful wedding ceremony. The celebrities such as Jesse Wood, and Laura Whitmore, were also part of their marriage. Alexandria Hall managed their wedding photography.

For the big day, Amanda wore a full-sleeve gown by Flora Bridal. She carried a rose bouquet from Petal Of The Metal UK. Similarly, Julian chooses a blue tuxedo, a red tie and a white shirt to exchange the wedding oath. Amanda shared her wedding news saying, “Married to my best friend @julianokines #Bestdayourlives #feelingblessed.”

The couple married for the second time on the beach in Amilla Maldives Resort and Residences. Sharing a beautiful wedding setting, Amanda wrote, “So good, I married him twice!! Just had the most amazing honeymoon blessing on the beach, a dream come true! Thank you @amillafushi for arranging such a beautiful day. We’ve been utterly spoiled…#blessing #beach.”

Amanda and her spouse Julian have celebrated their sixth wedding anniversary. On April 9, 2022, Mr. Okines uploaded their wedding picture, wishing his wife Amanda their anniversary, saying, “Very grateful to be able to call this special soul my wife for SIX amazing years. Happy Saturday! Time flies!“

Amanda Byram And Julian Okines, Parents Of A Baby Boy

After a stressful fertility journey, the fitness model Amanda and her spouse Julian finally welcomed an adorable baby boy. Sharing a picture of a newborn baby holding her finger, she shared the news of their son’s birth with a sweet message.

Mrs. Okines begins, “And then there was you. I’m so overjoyed, full of love and bursting with happiness to be able to share with you that @julianokines and I have welcomed our incredible son, Phoenix Blaze Byram Okines into the big wide, wonderful world. What a privilege that he entrusted us to nurture and guide his little soul through the endless possibilities of life and we are eternally grateful to him for choosing us to be his parents.“

Amanda also added how heartbreaking their fertility journey was, saying, “Our fertility journey has been long and we know only too well the heartbreak of the hope that turned to hopelessness, the elation that turned to devastation and the strain putting this often-secretive journey before your job, your friends, and your life.” Currently, Amanda and Julian are jointly nurturing their less than a year-long Phoeniz Blaze.