Skip to content
Home » Entertainment » Is The Modern Family Actress Sarah Hyland A Married Woman? Who Is Her Husband?

Is The Modern Family Actress Sarah Hyland A Married Woman? Who Is Her Husband? 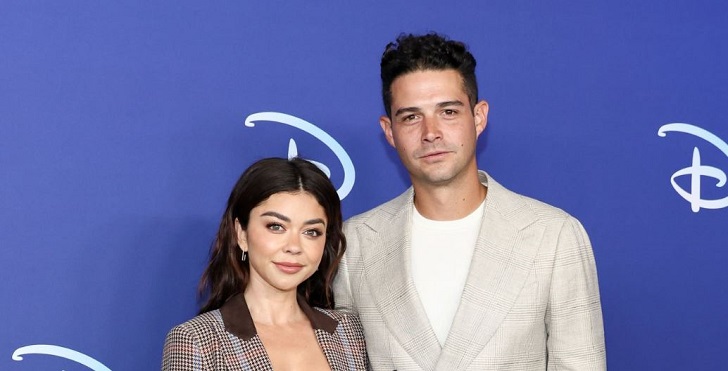 The Manhattan native Sarah Hyland is a graduate of the Professional Performing Arts School. Following her parent’s footsteps (Melissa Canady and Edward James Hyland), Sarah landed in the acting sector in 1997. Since then, Hyland has been an active member of the Hollywood Industry, working in various popular movies and TV shows.

Hyland doubtlessly earns a hefty sum of wealth from her two-decades-long professional acting career. She has an approximate net worth of $14 million. But, what about her personal life? Is the actress in a marital relationship? Know about it in the following sections.

The 31 aged actress Sarah is not a married woman. But, she is in a blissful romantic relationship with her husband-to-be, Wells Adams. Hyland and Adams have been postponing their marriage plans due to COVID-19. But, the duo has decided to get married in 2022.

Hyland’s partner Adams is a Radio and TV Personality. Similarly, Wells is also a reality star featured in The Bachelorette (season 12) and The Bachelor in Paradise (season 3). Likewise, Adams co-host ‘Your Favorite Thing Podcast With Wells and Brandi’ with actress Brandi Cyrus.

The Dirty Dancing actress Sarah and reality star Wells began their romantic relationship in October 2017 after meeting over social media. They first shared pictures on Instagram in October 2017, sharing images from their Halloween party dressed as Eleven and Dustin from Stranger Things.

Hyland received a kidney transplant from her father after being diagnosed with kidney dysplasia. And Wells was there helping and supporting Sarah in her worst health condition.

In an interview with Self Magazine, Sarah said, “He’s seen me at my worst. I think that’s why I feel the most beautiful in his eyes, because he still finds me beautiful after seeing all that. It was a intimate start to a relationship to have to go through those hurdles at the very beginning when you’re just even getting to know a person.”

Wells proposed to his girlfriend, Sarah, following more than a year-long dating. Adams got down to one knee and popped the question romantically on July 17, 2019, on the beach overlooking a beautiful ocean. The partners revealed the news of their engagement through Instagram posts.

On July 17, 2019, sharing pictures flaunting a diamond engagement ring, Hyland wrote, “That can’t eat, can’t sleep, reach for the stars, over the fence, world series kind of stuff .” Similarly, Wells shared an engagement video saying, “I’ll be Johnny, you be June. But forever.”