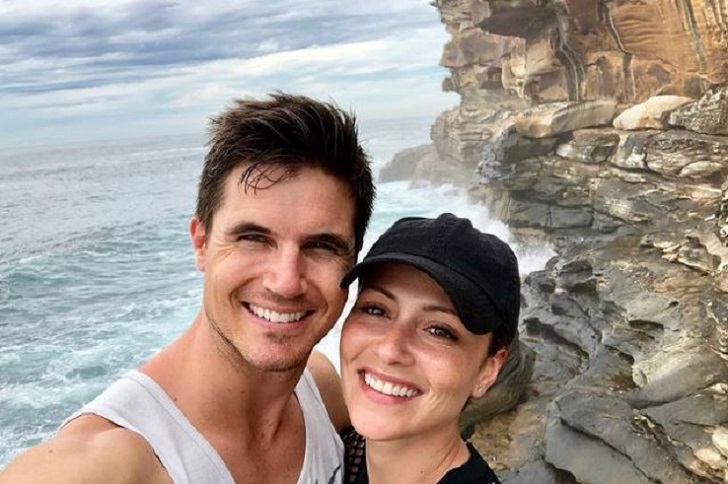 The Queens University graduate Ricci lives a limelight life due to her successful professional work. But what about Italia’s personal life details. Get the detailed information regarding Ricci’s marital life in the following sections.

Who Is Italia Ricci’s Husband? Their First Encounter

Italia and Robbie had their first encounter on the set of American Pie Presents in 2007. In the film, she plays the role of Laura Johnson, and Robbie portrays Nick Anderson. Likewise, Italia and Robbie have also worked together in the 2010 series Unnatural History.

After knowing each other, Ricci and Amell began sharing a good bond. They officially started their romantic relationship in 2008.

After more than five-years-long dating, The Tomorrow People actor Robbie proposed to his longtime girlfriend Italia with a diamond engagement ring. The couple revealed their engagement news via an Instagram post.

On August 20, 2014, Robbie shared the picture from their engagement with the caption, “She said yes!!!… I think. I can’t really be sure. I’m going to marry my best friend.” Similarly, on August 21, 2014, Italia shared an image with Robbie flaunting her engagement ring, saying, “I’m so lucky.”

Following a two-year-long engagement, the pair exchanged the wedding vowed on October 15, 2016. The intimate wedding ceremony was held in Los Angeles in attendance of their family members, friends, and relatives.

Their wedding planner was Mindy Weiss, a celebrity event planner, and Dimitry Loiseau managed photography. Similarly, the wedding was featured in US Weekly Magazine. To walk down the wedding aisle, bride Italia wore a strapless ball gown by James Clifford. Likewise, the groom, Robbie, opted for a black tuxedo.

The married partner announced that they were expecting their first child on April 19, 2019, via Instagram. Later, Italia gave birth to her and Robbie’s first kid, a son, Robert Patrick Amell V, on September 12, 2019.

Revealing the news of Robert V’s birth, Italia wrote, “Today we welcome Robert Amell V into the world but also find out that being triple extra pregnant increases your odds of birthing Gollum.” As of now, two years old Robert is living merrily with his celebrity parents.

Unlike star kid Hudson London Anstead, Robert V is kept far from the spotlight. Furthermore, Italia and Robbie share pictures of their son’s hands and legs on their social sites.